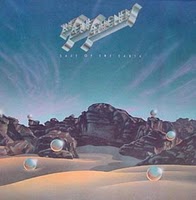 The Soul Searchers were a large funk outfit from Washinton DC that were held in high regard in the seventies despite their limited output. This LP is perhaps their best known as it has been plundered heavily by hip hop artists such as Eric B & Rakim, Ice Cube, LL Cool J and Public Enemy. It is this use of the material that makes many of the tracks sound extremely familiar on first listen. The uptempo funkier tracks such as “Blow Your Whistle” and “Ashley’s Roachclip” highlight what a great horn section the band had and are the pick of the cuts. Things slip a little on the ballads which do sound a little dated. The exception is the strangely compelling cover of Bacharach’s “Close to You.” –Jon