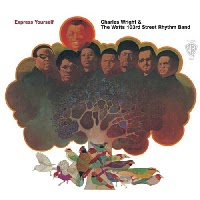 Somewhere between the funk formalism of James Brown and free-spiritedness of Sly Stone can be found Charles Wright. In a perfect world, this enormous talent would be mentioned in the same breath as Redding, Gaye, and Green, but Wright’s long-term success was hobbled by the line-up changes of his various backing bands, inconsistent records, and other music biz unpleasantries. Though he recorded lots of great music–even his weakest efforts are at least worth hearing–this record is his best. Its title track is its most famous (and most sampled), but other tracks like “I Got Love” and the free-form funk freakout, “High as Apple Pie parts 1 & 2”, give it a gospel-like sense of joy. Few reissued records have caused as much confusion as this one. The original release kicked off with a tight little number called “A Road Without End”. Future pressings, however, replaced that track with “Love Land”, which appeared on his previous LP, In the Jungle Babe. “Love Land” is a great song in its own right, but it doesn’t suit the feel of Express Yourself as well as the track it replaces. For this reason, an original pressing of the record is well-worth tracking down. –Richard P