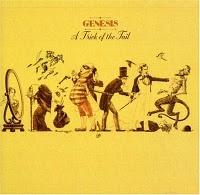 If Genesis is, at best, a guilty pleasure (and I’m not necessarily implying they are), what to make of post-Peter-Gabriel-Genesis? And if they’re not a guilty pleasure (and I’m not fully prepared to say they aren’t), but rather, with Gabriel at the helm, the Most Wonderfulest Group on God’s Grey Earth—what happens to the listener who says A Trick of the Tail is probably nearly almost just about as good as Selling England by the Pound? Shall he be drawn and quartered?

With more emphasis on rhythm, due to less cluttered production and willful eccentricity, the group seems to hit their stride as a (relatively) straightforward rock outfit following the departure of resident eccentric Peter Gabriel. The emergence of Phil’s drums are just the refreshing advance that was needed after all that murky “orchestration;” but the orchestration on this album’s predecessor leaves a lot to be desired on this weird crossover, an album that mines territory similar to Lamb’s predecessor, Selling England by the Pound, but lacks the structural inventiveness and the skewed cinematic sense the group had captured on the latter and the aforementioned follow-up, an unwieldy but frequently incredible record.

For those who entirely discount post-Gabriel Genesis, much of this (and its successor, for that matter) are pretty solid. Arguably not up to the standard of anything that came before, but, trading in some of the “drama” for a stronger attack and a little much-needed directness, this stuff is pretty, and mostly pretty compelling. Phil Collins haters be damned! –Will