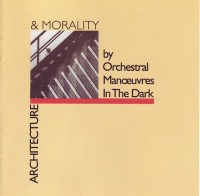 Both sides begin with synth pop of the highest order – in fact, one could make a strong argument that the two variations on “Joan of Arc” are the greatest new wave singles of all time, the “Maid Of Orleans” version’s musique concrete intro and waltz time signature making it an astoundingly atypical hit single. “The New Stone Age” is a startling and dirty rocker whose sound may not have much in common with the rest of the album but certainly set the depressed, hurt tone perfectly (and the experimentation with near atonality foreshadows the more ponderous passages of the record). The one-two punch of “She’s Leaving” and “Souvenir” are just gorgeous, however.

What sets this apart from nearly every record of its type and time, though, is the way either side goes out. Tracks like “Sealand” and the title cut wouldn’t feel out of place on a Brian Eno record, while “Georgia” begins with Kraftwerk robotics and ends in an ambient whir. “The Beginning and the End” is a perfect mix of the two sides of Orchestral Manoeuvres in the Dark, a lush vocal piece that is nevertheless indebted more to Gregorian chant than any sort of rock or pop fore-bearers. This record is perhaps the ultimate statement of synth pop/new wave as an artform, and a must for anyone even remotely interested in the genre. —Andrew