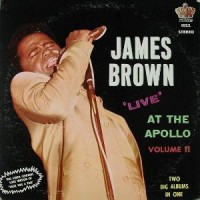 By the time this double album hit shops, people were pretty well aware of James Brown the entertainer. But this live album reveals the emergence of James Brown the innovator; his tight work ethic wrung his Famous Flames into one smooth-running combustive engine capable not only of groove but also of vibe.

James Brown and his Famous Flames run through some pretty standard r&b and soul fare on side one with versions of “Think” and “That’s Life” which only hints at what’s to come with chicken scratching guitar lines and Brown’s lockstep vocal commands. Too many changes run the gamut in these numbers to really give the groove for which Brown would become known for with the Flames and later, his J.B.s backing band.

Side two is where the funk becomes prevalent and shows the future course Brown and Co. would be taking. A medley takes up most of this side comprising tracks “Let Yourself Go” “There Was a Time” and “I Feel All Right,” which is presented as one seamless, repetitive groove-maker feeding off of audience participation. Meanwhile, the Famous Flames act as one autonomous unit set to Brown’s strict preferences throughout these performances. Classic cut “Cold Sweat” comes in on command from their funky fuehrer and closes out side two.

The funk continues on side three, but not quite in the same lose-yourself-to-dance futurist vein as the previous side. Classic “I Got You (I Feel Good)” arrives in an incredibly abbreviated 30 second form and opens into the splendid and eventually entrancing “Prisoner of Love.” Side four closes with old familiar numbers leading up to the finale of “Please, Please, Please…”