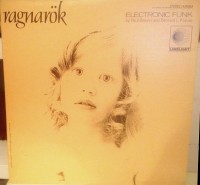 Back in 1997, I spotted a tattered copy of Ragnarök in a New Orleans used-record shop. The sexuagenarian owner had carefully wrapped the entire cover with clear tape, as it was eroded and moldy with water damage. Intrigued, I asked the proprietor to play the record so I could determine if I wanted to drop the $34 he was asking for it. (At the time, that was a very large amount for me to spend on a used LP.) From the first seconds of the title track, I knew I had to have it, astronomical sum be damned. It sounded like the most sinister and strange dystopian-sci-fi-film theme this side of Gil Mellé’s Andromeda Strain score. Years later, I found a clean copy, but I’ve always kept the original to remind myself of that magical moment in NOLA that turned me on to the peculiar genius of synthesizer maestros Paul Beaver and Bernie Krause.

Before they cut Ragnarök, Beaver & Krause had put together the synth-demonstration box set The Nonesuch Guide To Electronic Music. It’s good for a listen or two, and then you put it on your shelf to impress collectors. In 1967, Beaver wilded out on a Moog in the Monkees’ “Star Collector.” And Krause played a key role in helping George Harrison record his 1969 Moog-powered LP Electronic Sound; side two was essentially Krause giving Harrison a synth tutorial, which Krause had no idea would be released and with which he wasn’t pleased. Around the same time, Krause and Beaver cut Ragnarök, their masterpiece—and, maddeningly, their hardest release to obtain. On the back cover, Beatles producer George Martin rhapsodizes about B&K’s Moog prowess: “Among the earliest to realize the potential of the instrument, their knowledge and technique of its use are unsurpassed.” The late studio wizard was on point.

Dropping the needle on Ragnarök, following the spook-out of “Ragnarök,” you get 180º’d by the folky ballad on Moog and 12-string guitar that is “The Fisherman.” It features Krause’s earnest, not-unpleasant vocals that verge on sentimentality and lyrics that derive from an 8th-century poem by Chinese writer Li Po. “Circle X” is an incredibly ominous and anguished piece of imaginary horror-flick musick that could’ve fit in well on David Lynch’s Eraserhead soundtrack. “Dr. Fox”—featuring kooky lyrics by Leonard Lipton, author of “Puff, The Magic Dragon”—is one of the zaniest electro-pop/pseudo-circus-music jams you (n)ever did hear. Heard while tripping on acid, “Dr. Fox” will reduce you to tears of hysterical laughter, especially the part where Krause sings, “Dr. Fox built the freaking brain box that freaks me out/Every time he plugs me in, I spin, I spin, I spin [chuckle], I spin” over bleeping-and-blorping synth spasms.

Similarly, you will not keep a straight face when hearing “Moogy Blues Funk,” an absurdly jaunty old-time ditty that’s gussied up with thickly distorted Moog belches. By contrast, “As I Hear It” boasts such a beautifully wistful melody that you just know it broke the hearts of Boards Of Canada when they (probably) heard it in the early ’90s. “Fountains Of The Dept. Of Water & Power” is a veritable wonderland of Moog-y ostinatos while “33rd Stanza Of A Hymn To Sancho Panza” conjures vertiginous space-synth menace. “Changes” and “Interplay”—which come from a film score called Breakthrough—are alternately stately and whimsical synthesizer studies, with a rare use of drums on the former.

This very odd LP has never been reissued on vinyl or CD. If there’s a good reason for this, music-industry sages, please inform us. Somebody—legitimately or not—needs to bring Ragnarök back into circulation. -Buckley Mayfield