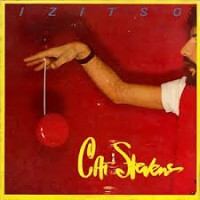 After he became a folk-pop star but before he changed his name to Yusuf Islam and said harsh things about Satanic Verses author Salman Rushdie, British singer/songwriter/guitarist Cat Stevens released this odd little LP. It’s best known for the chart-dwelling “(Remember The Days Of The) Old Schoolyard,” a bit of grandiose, schmaltzy synth pop that sounds like Styx crossed with Genesis or something. Most of the rest of Izitso—a keyboard-heavy effort with Chick Corea, the Muscle Shoals rhythm section, and 11 freakin’ engineers on it—is about as insubstantial and forgettable as its title, a mix of mediocre, commercial rock bluster and effete electro pop. Today you can commonly find copies of it in bargain bins nationwide. You’ve probably passed over this one 17,000 times in your life, give or take a thousand. However, I would like to implore you to grab Izitso next time you see it, if only for the ridiculously named instrumental “Was Dog A Doughnut.”

Well before Herbie Hancock’s similar-sounding “Rockit” and even preceding Kraftwerk’s “Trans-Europe Express,” “Was Dog A Doughnut” effectively created the electro genre. Listen to the spacey array of synth tones hovering, percolating, and plinking around the stuttering, funky beats and that crazy dog-bark punctuation, which was actually a synthesizer setting and not a real or sampled canine. (Big ups to keyboardist Corea and guitarist Ray Gomez for their invaluable contributions.)
The fool who reviewed Izitso for Rolling Stone said “the electronics on ‘Was Dog A Doughnut’ are a bit too robotlike”—like that’s a bad thing. I wonder what the just right amount of “robotlike”ness would be to this critic. On the plus side, though, Roots drummer Questlove told Christine Kakaire of the redbullmusicacademy.com that Stevens was just fucking around “and created a B-boy classic. What was just him messing around for four minutes in the studio wound up being a staple in the hip hop world,which he was very shocked to discover.” Kakaire went on to note that DJ Jellybean Benitez used to play it out at the New York club the Funhouse in the early ’80s and he cut a remix of “Dog” that also became a club staple. Rave icon Frankie Bones is also a huge fan of Stevens’ most anomalous song.

The track has rightly become a cult classic, and it’s hilarious to think that an urban, club-oriented genre like electro emerged, willy-nilly, from the same brain as the troubadour who penned frilly folk-pop hits like “Lady D’Arbanville,” “Morning Has Broken,” and “Oh Very Young.” This qualifies as one of the music world’s greatest WTF? turn of events. Get thee to a bargain bin, posthaste. -Buckley Mayfield