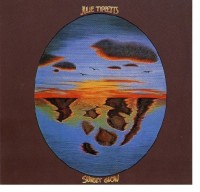 Sunset Glow came to my attention in the ’90s when underground-rock musician Bob Bannister of Tono Bungay mentioned in some zine that it was his favorite album of all time. That recommendation spurred me to search for the British soul vocalist’s debut LP, which I’ve only been able to find on CD. (Tip: A label could make a nice chunk of change with a vinyl repress of Sunset Glow.)

Previously Tippetts had sung with Brian Auger’s dynamite soul-jazz group the Trinity and had some success with their epic cover of Donovan’s “Season Of The Witch.” (Who didn’t back then?) With Auger, Tippetts—then known as Julie Driscoll; she changed her name when she married prog-rock keyboardist Keith Tippett—belted her numbers with flamboyant bravado and soulful throatiness. She has a voice you remember and savor. Its passion and timbre suggests she lives life to the fullest, and then some. So it’s somewhat of a surprise to dip into the aptly titled Sunset Glow and encounter a suite of seven songs that confront you on much more intimate and poised terms—although if you’re familiar with Driscoll’s superb 1969 album from ’71, the shock’s not quite so strong. In fact, they make wonderful companion pieces in her catalog.

Sunset Glow‘s opening song, “Mind Of A Child,” is a slow-blooming flower of summertime soul balladry that stands up with the best of your Joni Mitchells, Margo Guryans, and Linda Perhacses. You say “YES!” to it within a minute, and revel in its pensive bombast, if you have any damn sensitivity in you at all. “Oceans And Sky (And Questions Why?)” approaches a Linda and Sonny Sharrock-ian level of astral-jazz levitation and chaos. The title track carries a wandering, woebegone air that’s tempered with hints of optimism; one hears similarities here to Tim Buckley at his most oceanically amorphous.

Tippetts enlisted a crack band of Canterbury prog musicians to help her realize her special vision, including her husband, various Soft Machine and Centipede members, and South African drummer Louis Moholo. They manifested an apotheosis of artful folk jazz that could almost be viewed as the British version of Tim Buckley’s Lorca. Yeah, it’s that sublime. -Buckley Mayfield