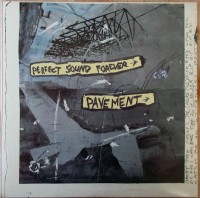 For a long time, I was a Slanted & Enchanted guy. I thought that had to be Pavement’s pinnacle… because that was the one that sounded most like the Fall. Impeccable logic, right? When Crooked Rain, Crooked Rain came out, I thought Pavement had gone a bit corny, a bit too R.E.M.ish. Pavement’s difficult third album, Wowee Zowee, restored my faith in Stephen Malkmus and company’s ability to get weird and unpredictable while still keeping things pretty structured. And then, for reasons I can’t really pinpoint, I stopped following Pavement. I just plain ignored Brighten The Corners and Terror Twilight. Maybe it was because I got intensely into IDM and drum & bass. One of these years I’ll go back and explore the last two Pavement full-lengths, but right now I have more important matters at hand.

Anyway, this preamble is just a roundabout way to say I’m reassessing my internal Pavement ranking system. I would like to argue that Pavement peaked on Perfect Sound Forever. (It originally came out on 10-inch, the fourth ever release on the esteemed Drag City Records; you can also find it on the compilation Westing [By Musket And Sextant].) Perfect Sound Forever‘s only 12 minutes long, but it epitomizes Pavement’s early phase, and it’s an exemplary bridge between their first couple of scrappy singles and the accomplished indie-rock obscurantism of Slanted & Enchanted.

“Heckler Spray” is one of the most brilliant opening salvos ever, a bravura noise-rock intro that separates the wheat from the boys and the men from the cream. These are the most heroic and needling guitar tones Malkmus and Scott “Spiral Stairs” Kannberg ever wrangled from their axes. Bow down to their majesty. If you want to hear how best to create a subdued rock anthem, study “From Now On.” On “Angel Carver Blues/Mellow Jazz Docent,” heavy and jagged guitars menacingly lurch, punctuated by staunch, hard beats. Then cooler heads prevail with the “Mellow Jazz Docent” section, which is still a deceptively scathing yet laid-back rejoinder to the first segment. Malkmus and his cohorts sound so effortlessly assured, blending melodic chops with an exhilaratingly caustic guitar attack.

“Drive-By-Fader” and “Krell Vid-user” form very strange and distorted bookend interludes on the second side. These brief, bizarre noise experiments represent Pavement’s most unhinged moments. By contrast, “Home” is some kind of slacker rock apotheosis. But then comes “Debris Slide,” Pavement’s zenith. It’s the catchiest, most raucous, and coolest song in their canon—like a bubblegum Sonic Youth tune, and perfectly titled.