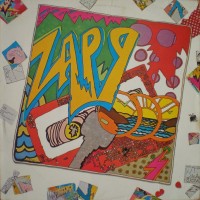 Zapp is a landmark of funk, one of the gleaming peaks of future-fucking ’80s R&B. Led by Ohio brothers Roger and Larry Troutman (with two other Troutman bros also contributing), Zapp were a family affair who weren’t as stoned as Sly. Bolstered by their association with P-Funk’s George Clinton and Bootsy Collins—the latter of whom co-produced Zapp with Roger—the Troutmans displayed a genius for minimalist funk jams that often centered Roger’s distinctive and virtuosic use of talk-box, which gave his voice a supernaturally mellow soulfulness.

Recorded at Detroit’s United Sound Studios, Zapp went Gold and reached #19 on the US pop chart and #1 on the R&B chart. If you’re a fan of the ’90s West Coast rap style known as G-Funk, you’ll notice tons of samples originating from the LP’s standout lead-off track “More Bounce To The Ounce” and the slick, midtempo funk ballad “Be Alright.” Yeah, Zapp is foundational in more ways than one.

Let us quickly focus our attention on “More Bounce To The Ounce.” It is, quite simply, the funkiest song of the ’80s—yes, even funkier than George Clinton’s “Atomic Dog,” Prince’s “Head,” or 23 Skidoo’s “Kundalini.” It’s no shocker that “More Bounce” wound up powering many a G-Funk rap track. It’s a masterpiece of minimalism, as the Troutmans et al. conduct a PhD seminar in dynamics; the way the bass chicken struts while the guitar chimes with percussive terseness and the massed claps snap where the kick drum should be, plus Roger’s unparalleled use of talk-box… well, it’s a once-in-a-lifetime coalescence of elements that you never want to end. I’m serious. It’s one of the hottest and coolest grooves humanity has ever conceived. This one song makes Zapp worth whatever price you’ll pay for it (likely around $10-$12, but don’t be surprised to see that rise).

The rest of Zapp doesn’t really approach the towering heights of “More Bounce,” but it’s solid nearly all the way through, in a way that few ’80s funk LPs are. “Freedom” is sly jazz funk with an indelible, thunder-thumbs poppin’ bass motif. “Brand New PPlayer” is a prime example of funk on the prowl, a slinky seducer with jazzy sax and guitar solos, subliminal congas, and clever male/female vocal interplay. It’s probably the most Parliamentarian cut on the album. The low-key trance-funk of “Funky Bounce” features an odd contrapuntal passage between slap bass punctuation and a fluid, bluesy guitar solo. Make no mistake: Zapp consist of musicians with serious chops. Sure, they’re fond of repetition, but they can flex virtuosity, too. An example is the crystalline, Wes Montgomery-like guitar accentuation that threads “Be Alright,” a slick, funky, summery ballad hobbled by boilerplate romantic lyrics—always a Zapp liability. Unfortunately, the album ends on its weakest note; “Coming Home”’s a peppy and schmaltzy R&B ditty that sounds like it should be scoring the end credits of a mediocre made-for-TV movie.

But pay that no never mind. Zapp‘s mostly golden, which in ’80s funk circles means it’s hella exceptional. Ask Dr. Dre and EPMD, among many others. -Buckley Mayfield