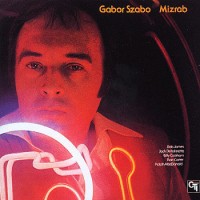 Good lord, did Hungarian guitarist Gábor Szabó have a distinctive and utterly sweet tone, albeit one imbued with deep sadness when the occasion called for it. After issuing some great records for Impulse!, Skye, and Blue Thumb in the ’60s and ’70s, he moved to Creed Taylor’s CTI label and smoothed out a bit, as per that company’s overriding aesthetic. But with Mizrab, Szabó cut the definitive version of the title track. You need this LP for that dazzling cut alone, but there are other delights here, too, even though this isn’t the man’s best full-length. (Still trying to decide if it’s Spellbinder, Bacchanal, or Sorcerer.)

Recorded in the Van Gelder Studio with CTI all-stars like Bob James (electric organ), Ron Carter (bass), Hubert Laws (flute), plus fusion drummers Billy Cobham and Jack DeJohnette (playing in a much mellower style than they did with Mahavishnu Orchestra and Miles Davis, to say the least), Mizrab boasts an odd mélange of material. It starts with “Mizrab,” which is quite simply one of the most beautiful songs ever written. Szabó and company find the sweet spot among free-flowing raga rock, Central European folk, and pop jazz. Cobham’s drumming is agile and busy, touching on Latin shuffle and funk, while Szabó’s tone is crystalline and loaded with pathos. This tune never fails to trigger watery eyes and throat lumps.

“Thirteen,” another Szabó composition, is a lovely minor-key lament, as pensive and melancholy as a walk home after being fired from your job. You can hear some of Szabó’s mellifluous picking and piquant tone here in the oeuvre of former Sun City Girls guitarist Sir Richard Bishop; a high compliment. Unfortunately, that’s it for Szabó material on Mizrab. Next comes Carole King’s “It’s Going To Take Some Time,” a lightweight and syrupy orchestral jazz pop confection. You can feel the heavy hand of Taylor’s commercial directives at work here, although Cobham is always worth hearing, no matter what the context. That fluff is balanced out by a hip, Deodato-esque rendition of Dmitri Shostakovich’s “Concerto #2.” It’s a dynamic study in structure and mood, carried aloft by those rich CTI strings and Bob James’ deft arrangement.

The album closes with Seals & Croft “Summer Breeze.” This played-to-death, oft-covered 1972 hit single gets a fairly straightforward treatment, although DeJohnette adds all sorts of tasty accents and fills amid his martial-funk master rhythm and Szabó scrawls delicate calligraphy around the main melody. Again, one wishes Szabó had the clout to include more of his own work on Mizrab. Nevertheless, this is still a cool interpretation of that airiest of psych-pop baubles from the dusk of the hippie era—although I’ll take the Isley Brothers’ version, push comes to shove. As with all CTI LPs, Mizrab is worth buying as much for the cover image and glossy texture as for the music. -Buckley Mayfield