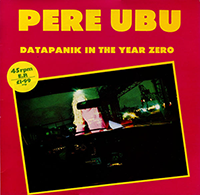 This five-track EP is a neat, efficient way to experience epochal Cleveland rock band Pere Ubu’s early material, derived from four singles released before the classic debut LP The Modern Dance exploded in the underground scene. Datapanik In The Year Zero contains some of the group’s greatest songs, plus “Heaven,” a rare descent into mawkish sentimentality. I know some of you dig it, but it strikes me as a misguided attempt at radio airplay, albeit through the unconventional backdoor of American white-boy reggae (that Tim Wright bass line is no joke, Jah bless). Anyway, let’s get to the all-time classics, which appear here in slightly altered form.

“Heart Of Darkness” and “30 Seconds Over Tokyo,” of course, stand as canonical slabs of rock existentialism rarely matched in the four decades since their release. The former’s lines “I don’t see anything that I want” and “Maybe I’m nothing but a shadow on the wall” compose some of the most shattering lyrics in rock. They remind me of Franz Kafka’s “A Hunger Artist” in their poignant estrangement from societal norms. The whole song’s so fucking ominous and full of unimaginable portent; too bad Joseph Conrad never had the chance to hear this. “30 Seconds Over Tokyo” is one of the most chilling pieces of music of the last 41 years. It recalls early Black Sabbath’s churning doom, but ruptured by an instrumental section full of noisy urgency and chaos, depicting the nervous system of a World War II pilot carrying the atomic bomb. By the end, the song appears to be splintering and tearing apart at the seams, which is an ideal way to finish such a harrowing composition. It’s a perfect convergence of the heaviest of subject matter with utterly gut-wrenching sonic abstract expressionism.

Relief comes from “Cloud 149,” one of Ubu’s most frantic and debauched pieces; it’s like a splenetic, sped-up version of ska, albeit sidetracked by a strain of garage-rock rave-up à la the Count Five’s “Psychotic Reaction.” Yet another peak in Ubu’s bulging catalog. “Untitled” is a rougher, earlier version of “The Modern Dance,” which, of course, appeared on the 1978 LP of the same name. Undulating and angular, the song moves with implacable, subliminal swiftness, until it pauses for a combustible jazz-fusion interlude. Tom Herman’s needling guitar origami nudges this track into a higher echelon of post-punk. And while I badmouthed “Heaven” above, it actually has too much understated weirdness—especially from Allen Ravenstine’s ill synth emissions—to attain hit status. It’s just that compared to everything else on Datapanik, it sounds rather conventional. -Buckley Mayfield