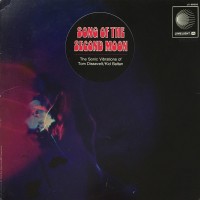 Imagine hearing this music when it was created, in the late ’50s and early ’60s. Imagine how far-fucking-out it must’ve sounded to people who hadn’t yet experienced the great psychedelic cultural upheaval of 1966, who probably had only the faintest idea of musique concrète and Bebe and Louis Barron’s 1956 soundtrack to Forbidden Planet. Dutch composers Tom Dissevelt and Kid Baltan (aka Dick Raaijmakers) cracked open a Pandora’s Box of bizarre and breath-taking electronic tones and textures that some of today’s producers are still trying to emulate almost six decades later. Song Of The Second Moon captures the duo at a creative peak, generating compositions that embrace menace and whimsy, as well as order and chaos, with a poise that elevates them to the level of other electronic innovators like the aforementioned Barrons and Raymond Scott.

Baltan’s “Song Of The Second Moon” is the kind of synthesizer opus full of off-kilter jauntiness and mercurial insectoid bleeps that made ’90s IDM stars like Mike “µ-Ziq” Paradinas extol it as a paragon of pioneering electronic music. The beautifully desolate atmospheres and shattered metallic timbres of Tom Dissevelt’s “Moon Maid” evoke a sense of awestruck wonder, of planets tilting off their axes. Baltan’s “The Ray Makers” foreshadows Tonto’s Expanding Head Band’s malfunctioning rocket noises on “Jetsex” [see my review of TEHB’s Zero Time from December 18, 2016] and Gil Mellé’s sinister, microbial ambience in The Andromeda Strain soundtrack. Dissevelt and Baltan were magicking science-fiction sonics that were way ahead of their time.

Song Of The Second Moon ends with a couple of deviations from the rest of the LP and reveal the duo’s facility for jazz maneuvers. On “Twilight Ozone,” Dissevelt offers a witty homage to Bernard Herrmann’s Twilight Zone theme, full of frightful horn fanfares and hurtling, white-knuckle rhythms. On “Pianoforte,” Baltan serves up nerve-jangling, disjunctive spy jazz that predates Ennio Morricone’s work in this vein by a half decade or so. Lordy, how did the squares of the early ’60s deal with this madness? Some heads still ain’t ready for this kind of structural and tonal discombobulation.