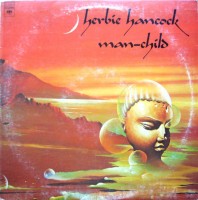 Jazz-fusion keyboardist/composer Herbie Hancock has had so many phases and so many different flavors of peaks over the last 55 years. (Said Capt. Obvious.) But one stunning LP that tends to get overlooked is Man-Child, which came shortly after his expansive Mwandishi band excursions as well as the astonishing avant-fusion trilogy of Sextant, Head Hunters, and Thrust and before his shockingly futuristic 1983 hit, “Rockit.”

With a triumvirate of drummers (James Gadson, Harvey Mason, and Mike Clark) on Man-Child that would make James Brown and George Clinton envious, Hancock embarked on a journey that was not maiden at all. Rather, it was among the most lethal displays of groove science this multifaceted musician ever laid down—perhaps only trailing Head Hunters and Thrust in his sprawling discography.

“Hang Up Your Hang Ups” starts Man-Child in striking fashion, with Paul Jackson’s absurdly elastic bass line leading into a five-dimensional funk conflagration with exultant horns and a frantic keyboard/guitar tussle. Hancock and company lay down grooves upon grooves, building up a contrapuntal party jam of extreme busyness and complexity. Note that Janet Jackson and N.W.A.—among others—have sampled this.

“Sun Touch” and “Bubbles” are leisurely fusion fantasias that are as substantial as sea spray and just as refreshing, if at times flirting too closely with dinner-jazz innocuousness. The former finds Hancock tickling out rapid curlicues on Arp Odyssey, which really redeems things, while in the latter, Melvin “Wah Wah” Watson bestows a glittering galaxy of guitar ejaculations over a lubricious, luxurious rhythm while Hancock conjures celestial strings with his expensive battery of synthesizers.

On “The Traitor” and “Heartbeat,” Herbie and the boys finesse some slippery, seductive funk with stalwart, strutting bass lines and Hancock getting maniacally intricate on his synths. These tracks bear a mad intensity not unlike that heard on the best Passport records. Probably my favorite piece on the album is “Steppin’ In It,” a sideways self-homage to Head Hunters‘ “Chameleon.” This is bulbous, bass-heavy funk that makes your bell-bottoms grow mutton chops; it’s like Sly & The Family Stone without the vocal acrobatics. What I mean to say is, “Steppin’ In It” deserves to be enshrined in the Funk Hall Of Fame—which is under construction now, right?—with the heaviest of the heavy.

When it comes to manifesting the funk, Hancock’s crew are playing 3D chess while most straight-up funk bands are playing checkers. -Buckley Mayfield