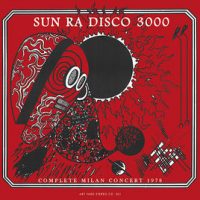 In the last half of the ’70s, music-biz law mandated that every artist had to cut a disco record. James Brown, the Rolling Stones, Rod Stewart, the Meters, esteemed jazz veterans like Yusef Lateef and Miroslav Vitous—it didn’t matter how established and respected you were; the industry-wide disco diktat had to be obeyed.

In 1978 while in Italy, Sun Ra and his tight quartet, the Myth Science Arkestra, paid lip service to disco (see the LP title), but as you’d expect from Herman Sonny Blount, the results here don’t at all conform to the genre’s major traits; nor are they exactly music to snort coke to, nor do they serve as preludes to getting laid. Rather, Disco 3000 is yet another anomaly in Sun Ra’s vast, strange discography. And that’s quite enough for me—and for you, too, I would wager.

On the astonishing 26-minute title track, over a chintzy rhythm-machine’s quasi-cha-cha beat, saxophonist John Gilmore and trumpeter Michael Ray blow mad, exclamatory arabesques, while Mr. Ra busts out some of his most severely warped tones on multiple keyboards and Moog synthesizer, raising plumes of alien glitter gas. All pretenses of regular meter quickly fly out the window. Throughout, Ra engineers passages of brilliant chaos, letting his insane menagerie of feral fibrillations and disorienting drones lift the piece into freeform, uncharted territory. If this is disco (it isn’t, let’s be honest), it’s a particularly Saturnine interpretation of the genre. I don’t think even renowned Italo-disco DJ Daniele Baldelli could smoothly segue “Disco 3000” into a KC & The Sunshine Band or Tantra track.

On “Third Planet” and “Friendly Galaxy,” piano, sax, drums, trumpet, and drums (played by Luqman Ali) cohere into rather conventional, bustling bop compositions. They offer respite before Ra and company head outward-bound again on “Dance Of The Cosmo-Aliens,” whose splenetic, galloping rhythm-box beats get wreathed with the sort of eerie, fairground organ motifs that haunted the Eraserhead soundtrack. The piece throbs with a manic intensity not unlike that of Killing Joke’s “Change,” oddly enough. Again, this ain’t disco as your lewd uncle Tony knows it.

On Disco 3000 in Sun Ra’s eloquent hands, space continues to be the place. And that’s quite enough for me. (Art Yard beneficently reissued Disco 3000 on vinyl in 2009.) -Buckley Mayfield