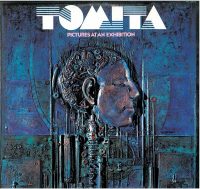 How many times have you flipped past this record? Probably dozens of times—or hundreds, if you’re like me. Then one day I said, “Fug it, I’m gonna splurge.” So I dropped the $3 it cost (never pay more than $3 for this) in order to find out what this bargain-bin staple’s all about.

Glad I did, but not happy about all the years I squandered by ignoring it for so long. For Pictures At An Exhibition is probably the strangest interpretation of Russian composer Modest Mussorgsky 10-track suite for piano, circa 1874. Not that I’ve heard them all, but it’s hard to believe anyone else has surpassed Isao Tomita’s synthesizer-powered rendering. (Although Emerson, Lake & Palmer do get pretty dang freaky on their 1971 effort.)

It’s axiomatic that Pictures At An Exhibition has became a showcase for virtuoso keyboardists. And that Tomita is. But he took the challenge further by deploying Moog, Mellotron, tape recorder, Sony mixer, and loads of effects. In doing so, the Japanese musician blew out the Russian’s classical composure to often grotesque, sci-fi dimensions.

When “The Gnome” kicks in shortly after the rather staid “Promenade,” you realize you’re in a much different century than Mussorgsky’s, as Tomita unleashes a display worthy of Morts Subotnick and Garson with regard to its array of shockingly spasmodic dynamics and spacey tonalities. Aswirl with ill timbres and graced with a powerfully melancholy melody, “The Old Castle” possesses a ruined grandeur. “Ballet Of The Chicks In Their Shells” is as unhinged as anything by Jean-Jacques Perrey & Gershon Kingsley or Cecil Leuter—or even Garson, in his most playful mode. It’s hilarious how impish this “Ballet” is.

One random Discogs commenter said this about Pictures: “The most complex, deepest, grandioso electronic album ever. Nothing come closer technicalwise. Incredible taste and power, unparalelled character.” [sic] I normally don’t place a lot of weight on what Discogs randos with dubious syntax have to say, but in this case I have to cosign. Look for Pictures in your next bargain-bin excursion. -Buckley Mayfield