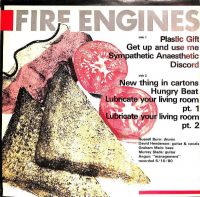 A fascinating book could be written about Scotland’s original post-punk scene, and I hope somebody’s on the case. One band who should figure prominently in such a tome is Fire Engines. Led by singer-songwriter-guitarist Davy Henderson, Fire Engines were a pop group, but spiky as fuck, buoyant yet abrasive, and terminally enamored of Captain Beefheart And His Magic Band. You can glean that from one listen to Fire Engines’ breathtaking 1981 single “Candyskin,” which nicks the melody from Beefheart’s “Sweet Sweet Bulbs,” and adds a phenomenal spring to its step.

Coming out slightly before that 45, Lubricate Your Living Room was a revelatory mini-LP that established Fire Engines as one of the UK’s most exciting rock bands. With a lineup filled out by Graham Main (bass), Murray Slade (guitar), and Russell Burn (drums), the Engines used Captain Beefheart’s guitar sound circa Trout Mask Replica and Doc At The Radar Station as their foundation: a nerve-fraying, traumatically trebly tonality. But instead of distorting the blues and translating rock into intimidatingly difficult math equations as the Magic Band did, Fire Engines sped up No Wave to a splenetic, amphetamine shriek, with Henderson yawping about consumerism’s pros and cons and problematic relationship dynamics. He begged listeners to “get up and use me” as if he were just another good on the marketplace.

Like contemporaries the Fall, Fire Engines lived for repetition in their rhythms and riffs. Unlike the Fall, the Engines loved manic cowbell patterns and had a propensity for freaky funk that distinguished them among their Scottish peers. These Edinburgh speed demons plowed so compulsively into their grooves, you expect their instruments to burst into flames, and/or for the needle to fly off the record.

Fire Engines only lasted a couple of years (1980-1981), but they staked a claim to immortality with a catalog consisting of a mere 18 songs. (Acute Records’ 2007 Hungry Beat CD comp might be your best bet—outside of streaming services—to hear what all my fuss is about.)  Lubricate Your Living Room is probably the definitive document of their raw, jagged, Beefheart-on-bennies rock.

Also, as with many records reviewed on this blog, this one could use a reissue. May this critique—however infinitesimally—help to make that a reality. -Buckley Mayfield