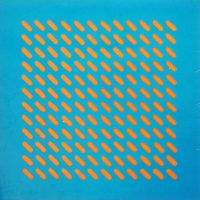 The first four OMD LPs represent some of the most affecting and influential electro-pop creations ever to ruffle a synthesizer manual. Their first one has always been my favorite of the bunch… and not just because of the rad Peter Saville die-cut cover design. Beyond the brilliant packaging, Orchestral Manoeuvres In The Dark set an incredibly high bar for swoonworthy melodies, efficient, heart-pumping beats, and clean-blooded male vocals. Mofos are still biting their style in 2018.

Even better than Soft Cell and Depeche Mode, OMD songwriters Andy McCluskey and Paul Humphreys struck upon an approach that fused instantly hummable tunes with unusual textures. Of their debut album’s 10 songs, a mind-boggling nine could logically be singles. The only exception is “Dancing” (irony!), an amazing anomaly that’s almost Residents-like in its subterranean otherness and strange array of FX’d voices; shockingly, its rhythm is closer to that of Throbbing Gristle’s “20 Jazz Funk Greats” than to anything on Top Of The Pops.

But, as I said, the majority of Orchestral Manoeuvres In The Dark bursts with a striking accessibility that is anything but LCD. The cleverly titled “Mystereality” boasts a sax part that lends the morosely peppy song a Roxy Music-like air, and the singing even resembles that of Brian Eno’s early solo efforts. “Electricity” is a fairly blatant homage to Kraftwerk circa Radioactivity, but it’s done with so much poised panache and sugar-rush urgency, slack is cut. The synth arpeggio in the heartbreak anthem “Messages” signifies an almost unbearable wistfulness, and the keyboard solo in the song’s middle section bears the grandeur of Kraftwerk at their Trans-Europe Express haughtiest.

My favorite OMD track of all time, “Julia’s Song,” contains the group’s most seductive bass line, which anchors some of their richest drones and a gorgeously sinuous melody that I wouldn’t mind being the last thing I heard on this mortal coil. “Red Frame/White Light” is an instant classic of frantic, spine-tingling effusiveness that would be a career highlight for most acts, but on this record it’s about the fifth-best cut.

You really can’t go wrong with any of the first four OMD full-lengths, but if you can only spring for one, go for this zenith of emotional synth-pop. -Buckley Mayfield

[You may also want to read our 2014 review of OMD’s Architecture & Morality.]