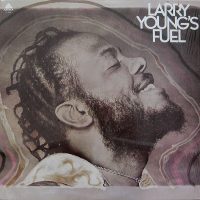 By 1975, jazz keyboardist Larry Young was straying far from his modal, Coltrane-esque dates for Blue Note, his contributions to Miles Davis’ Bitches Brew, and his fiery fusion experiments with Tony Williams Lifetime and Love Cry Want—and even his 1973 oddity, Lawrence Of Newark [a review of which you can find on this blog]. Signing to a major label like Arista may have had something to do with this change in direction, as it represents some of Young’s most accessible work. Yet for all its leanings toward R&B libidinousness and funk decadence, Larry Young’s Fuel remains an interesting and very DJ-friendly anomaly in the avant-gardist’s catalog.

“Fuel For The Fire” immediately lets you know that though the songwriting’s more overtly commercial, Young is still going to fire off some bizarre flourishes on his Moog, Hammond, and Rhodes. The funk here is complex, with bassist Fernando Saunders (Lou Reed, John McLaughlin, Jeff Beck, etc.) and drummer Rob Gottfried engaging in twitchy interplay that’s as groovily coiled and coked up as anything on Miles’ On The Corner. Laura “Tequila” Logan’s scat vocals aren’t as off-the-wall as Linda Sharrock’s or Urszula Dudziak’s, but they’re still odd for a funk/R&B context. “I Ching (Book Of Changes)” sounds like ELP going off on a torrid funk bender, with Young channeling Keith Emerson’s manic, rococo filigrees. “Turn Off The Lights” could easily be a Betty Davis sex-scene-setter thanks to Logan’s lusty vocal pyrotechnics and a bass line that’s rated XXX. Young gets off some amazing Moog ejaculations, to boot. An exciting side one, to be sure.

Side two begins with the instant dance-floor-filler/mood-elevator, “Floating.” The lithe buoyancy of Saunders’ bass and Gottfried’s hi-hat-enhanced 4/4s coupled with Young’s radiant Hammond whorls gives the track an almost cosmic-disco atmospheric strut. “H+J=B (Hustle+Jam=Bread)” is another proggy funk workout in which Saunders and Young appear to be dueling each other to see who can most peel off the most outré notes and chords (Young wins). The hyperkinetic, intricate “New York Electric Street Music” replicates the furious bump and grind of On The Corner (that record again), with Santiago Torano’s guitar finally breaking through Young’s extravagant solos to snarl and wail with authority. The only thing keeping this track from classic status is Young’s goofy vocalizing about the the titular city and ad libs like “Humor is better than a tumor” and “Charisma is better than a caramba.” Oy.

Oh, well, that’s a rare misstep on an album that will surely rankle Young’s more purist jazz fans, but should please those open to a world-class musician trying to weird up a mid-’70s mainstream genre on a big corporation’s dime. -Buckley Mayfield