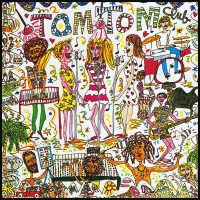 Tom Tom Club’s debut LP is proof you can judge an album by its cover. Artist James Rizzi depicts the band members—led by Talking Heads bassist Tina Weymouth and drummer Chris Frantz—playing their instruments in a tropical paradise. It’s a busy illustration exploding with cartoonish glee, and it captures the carefree, buoyant spirit of Tom Tom Club’s music—a fantastical vacation from the Heads’ angsty, cerebral art-rock. (Not that Talking Heads couldn’t have fun; but their sound always has possessed a more prominent veneer of intellectualism and Eno-fied studio magic.)

Recorded in Barbados with Weymouth’s sisters Loric, Lani, and Laura on vocals, Adrian Belew on guitar, Steven Stanley on percussion and co-production, Tyrone Downie on keyboards, Uziah “Sticky” Thompson on percussion, and Monte Brown on guitar, Tom Tom Club reached #23 on the US album charts. That success was largely due to the two hit singles that lead off the record.

“Wordy Rappinghood” is one of the best songs ever with typewriter sounds in it, and it’s also one of the first tracks to feature rapping by a white woman, though it has to be said: Tina Weymouth is no Debbie Harry. Overall, “Wordy Rappinghood” is elite novelty electro-funk with a fantastic conga solo and insanely adorable Japanese-language (or is it nonsense?) chants by Tina’s siblings. “Genius Of Love” is the album’s peak, and one of the definitive tracks of the ’80s—and it’s been sampled a staggering 147 times, according to whosampled.com. This worldwide club smash is an über-sexy, supremely funky dub jam with nearly the same clapper beats as George Clinton’s “Atomic Dog,” and an absurdly elastic keyboard riff that bears the DNA of Bernie Worrell (who worked on Remain In Light). Tina’s fathoms-deep bass line is worthy of Robbie Shakespeare (one of many musicians extolled in the song’s lyrics, along with Bohannon, Smokey Robinson, and other funk-soul legends). It never gets old—and I’ve heard it about 200 times.

While the rest of this lovely full-length can’t match that opening 1-2 punch, there are lots of other mood-elevating moments. “Tom Tom Theme” is a rolling, minimalist tom-heavy percussion workout of low-key dopeness that leads right into another highlight, “L’Éléphant,” which features Belew’s guitar emulating the strident wail of the titular animal over a martial yet tropical dance rhythm, while “As Above, So Below” is an eerie, festively ominous funk number that could almost slot onto side 1 of Remain In Light. The album closes with the breezy banger “Lorelei” and the kitsch sci-fi funk of “Booming And Zooming.” (The 1982 reissue contains remixed versions of “Lorelei” and “On, On, On, On,” plus a bubble-funk/reggae-fied version of the Drifters’ “Under The Boardwalk,” which supplants “Booming And Zooming.”)

On their enchanting debut, Tina and Chris let the rhythm hit ’em, and the world’s been swerving and swooning to it ever since. -Buckley Mayfield