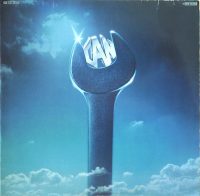 Can’s 11th studio album, Can (aka Inner Space), generally receives less attention and praise than their earlier, better-known full-lengths, but it’s actually a pretty strong record. There are some duds here, to be sure, but when they’re good, they’re very good. Even at this late, these krautrock legends still had mad creative juice.

By 1979, Can were in a weird place. Original bassist Holger Czukay was relegated to editing tape in the studio; Traffic and Stomu Yamash’ta bassist Rosko Gee replaced him, while fellow Traffic member Rebop Kwaku Baah joined the group as a percussionist. Wonderfully idiosyncratic singers Malcolm Mooney and Damo Suzuki were long gone, so guitarist Michael Karoli assumed vocal duties with a workmanlike blandness. Yet despite this inauspicious situation, Can still delivered five excellent tracks (out of eight), which is quite respectable for a band 11 years into their career.

Can opens with one of the unit’s greatest tracks of any period, “All Gates Open.” (Note: The new Can biography by Rob Young and keyboardist Irmin Schmidt uses this phrase as its title.) Jaki Liebezeit kicks out a busted-metronome beat that sort of mocks disco while Czukay ladles in mysterious, menacing noises and Karoli jams out a riff that the Fall stole for “Shoulder Pads 1 & 2.” Eventually and without warning, Schmidt generates a radiant swell of tones that overwhelms you like an orgasmic epiphany. And then there are the bluesy harmonica parts—about the last thing you’d expect in a Can composition. This is an eight-minute epic worth every odd second. Another eight-plus minutes of weirdness, “Safe” finds Karoli channeling Carlos Santana’s rococo, piercing runs and Czukay creating a bizarre, cavernous soundworld as Liebezeit keeps lopsided martial time. “Sunday Jam” offers more Latin-rock lushness with a rhythm that gushes forth with an abundance of “Black Magic Woman” intrigue. Side 1 slays all in its path.

Side 2 starts extremely well, with “Sodom” and “A Spectacle.” The former is a very ominous rock song that bears the gravitas of Goblin or post-Syd Pink Floyd, as Karoli wrenches serpentine, liquid silver from his guitar. The latter is an elegantly spluttering specimen of disco (not disco) that starts startlingly in mid-stride. As Gee’s bass line sends your ears on a thrilling roller-coaster ride, Liebezeit concocts a miracle of stutter-funk footwork and sticksmanship. You need at least three legs to dance to this track properly.

“E.F.S. Nr. 99 (Can Can)” is where things get dicey. This admittedly spirited cover of a piece by the 19th-century composer Jacques Offenbach was seemingly done for its wordplay potential alone. Let us never speak of it again. “Ping Pong” captures 25 seconds of a ping-pong ball bouncing. Why?! Dunno. Because they could? Finally, the flamboyant biker-rock blowout of “Can Be” recalls “Full Moon On The Highway” from Landed, but it’s not as badass.

So, yeah, Can ends bafflingly badly, but its high points are so stratospheric, they’re cancelled out. Don’t pay attention to the fans who say Can didn’t make any great records after Future Days or Soon Over Babaluma. This one’s a stunning sleeper. -Buckley Mayfield