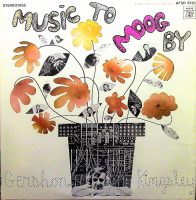 It’s 91 degrees outside as I write this. Ain’t no way I’m going to tackle something heavy in these conditions. So, with a sigh of relief, let’s turn to Music To Moog By, one of the gems of the Moogsploitation subgenre, by one of its masters, the German-American composer Gershon Kingsley (who is now 95, fact fans).

Famous for his collabs with French Moog master Jean-Jacques Perrey (The In Sound From Way Out! and Kaleidoscope Vibrations; the former a big influence on the Beastie Boys), Kingsley here shows he could succeed on his own. “Hey Hey” is one of the most fantastic album-openers ever. It was sampled by producer RJD2 for “The Horror,” and you can hear why: That opening drum break is serious hip-hop fire, and the rest of the track explodes in space-opera/sci-fi drama, like an alternate-reality theme for Star Trek. Holy shit, is this track exciting. If you’re a DJ who wants to grab the crowd’s attention from the jump, “Hey Hey” is a stellar choice.

Kingsley then takes things way down into contemplative, melancholy pastorality with the traditional English folk ballad “Scarborough Fair,” and it’s deeply affecting. He follows that with “For Alisse Beethoven,” a pastiche of the German composer’s “Für Elise,” but done with more modern urgency and skittering beats that almost foreshadow drum & bass and some of Luke Vibert’s ’90s output.

There are a few pieces on Music To Moog By that seem a bit too geared for TV movie scenes where the protagonist’s life suddenly takes a turn for the positive. “Sheila,” “Sunset Sound,” and “Trumansburgh Whistle” all traffic in pretty and precious, MOR melodicism—albeit too heavy on cutesiness to merit deep listening. And then there’s “Twinkle Twinkle,” the children’s song, but embellished with rococo, lush Moog flourishes. Don’t let your friends catch you listening to this trifle.

Because every record released in the late ’60s and early ’70s by law had to have Beatles covers, Music To Moog By contains a couple: “Nowhere Man” and “Paperback Writer.” The former version really brings the maudlin nature of the Beatles song into clearer relief. Frankly, I don’t ever need to hear it again. However, Kingsley’s “Paperback Writer” builds serious drama through augmenting the main riff with resonant bass and accelerating the tempo at unexpected moments… and then adding a guitar solo that sounds as if it were beamed in from a Moby Grape or Fever Tree record. Saving the freakout for the fadeout lends the album that coveted “leave ’em wanting more” feeling. Thus, Music To Moog By ends as powerfully as it started.

(Note: The Wah Wah, Dagored, and Tam-Tam labels have reissued this album over the last two decades. It shouldn’t be too hard to find.) -Buckley Mayfield

One comment on “Gershon Kingsley “Music To Moog By” (Audio Fidelity, 1969)”