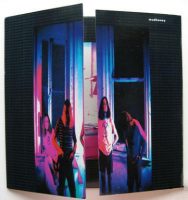 Seeing Mudhoney tear it up at SPF30, the free outdoor festival held August 11 at Alki Beach celebrating Sub Pop’s 30th anniversary, reminded me again why y’all need to listen to their explosive debut album with fresh ears. This thunderous slab tends to get overlooked by its predecessor, Superfuzz Bigmuff (which we reviewed in this space in 2010) and Every Good Boy Deserves Fudge—both of which are crucial, of course. But clear some space in your busy life for Mudhoney, too. It really holds up. You can verify that due to Mudhoney’s insistence on playing a lot of material off this one in live sets 29 years after its release.

The sinister and seething “This Gift” boots the album into life with an oblique homage to the Stooges’ “No Fun”—a fantastic way to open your first LP. As a bonus, the phased guitar shivers recall Butthole Surfers’ “Cherub.” In the liner notes to the March To Fuzz best-of comp, Steve Turner quipped, “I’ve always figured Mark was talking about his dick here.” Songs like“Flat Out Fucked,” “Here Comes Sickness,” and “The Farther I Go” are anthems of rage, highly torqued hard rockers that writhe with youthful truculence and ill wah-wah destruction. I remember dudes with bald heads and graying ponytails slamdancing to this at the Tractor Tavern a mere six years ago.

The explicit Blue Cheer tribute “Magnolia Caboose Babyshit” is 65 seconds of ozone-depleting, speed-gobbling biker-rock—hell-raising elevated to a debased art form. “Come To Mind” is the “ballad” of the album, sort of like “Ann” was the “ballad” of The Stooges. Meaning, it still has violence in its heart and steel in its phallus. “When Tomorrow Hits” represents yet more Stooges love, as it’s sorta Mudhoney’s “We Will Fall.” This badass glowering tune was covered by Spacemen 3 on their Recurring LP, and it almost seems as if Mudhoney wrote it for those opiated British blokes. Album-finale “Dead Love” encapsulates Mudhoney’s nearly unmatched ability to summon unstoppable rivers of magmatic rock.

While Mudhoney captures the Seattle grunge pioneers (sorry, guys, but you’re stuck with that tag) at an early peak, they have barely slipped from that lofty level of high-energy, powerful rock action three decades later. Freaks of nature, for sure… -Buckley Mayfield