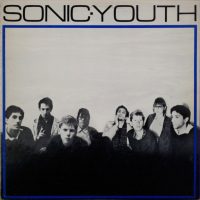 Often overlooked and underrated, Sonic Youth’s debut mini-album is a fascinating snapshot of the New York City avant-rock icons’ nascent greatness. It would be hard to find anybody who’d claim the five-track Sonic Youth is the band’s finest moment (though no doubt they’re out there), but it does merit respect as an auspicious hint of what was to come—even though it was the only record on which SY played in standard tuning.

What Sonic Youth makes clear from the beginning of lead-off track “The Burning Spear” is that they were eager to bust out of rock-song conventions and invent their own approach. Part of that impulse included guitarists Thurston Moore and Lee Ranaldo’s desire to make their instruments sound unlike other rockers’. You can hear them already generating the urgent alarm-bell clangor for which they’d be famous later in the decade. They don’t riff so much as erect environments—metallic, droning vistas redolent of post-industrial devastation and fraying nerves. Kim Gordon’s tensile, marauding bass straddles the line between dub and post-punk, not unlike how many other early ’80s groups were doing then. Ranaldo ran a mic’d electric drill through a wah-wah pedal for extra WTF? texture while Moore wailed like the No Wave disciple he was. What a way to blow out of the gate.

By contrast, “I Dream I Dreamed” is aptly oneiric, a mesmerizing lope animated by loitering guitars spangling with menace. The song swells in intensity and then subsides to allow Gordon and Ranaldo to sing some baffling lyrics in counterpoint (sample line: “A lot of people suffer from impotence/All the money’s gone”). Overall, SY effectively and nonchalantly create a detached sense of desolation. “She Is Not Alone” is one of the oddest entries in Sonic Youth’s discography; it’s jaunty and miniaturist, almost like a dubby Young Marble Giants or General Strike, as the guitars are tuned to sound like a warped xylophone and Richard Edson tattoos the tightly wound tom-toms with some rudimentary Native American patterns. (Yes, Richard Edson the actor in Jim Jarmusch’s Stranger Than Paradise and Susan Seidelman’s Desperately Seeking Susan; he left SY for Konk after performing on this record.)

“I Don’t Want To Push It” reputedly was inspired by Can’s “Sing Swan Song,” but this is way more manic, with Edson’s kinetic beats buttressing a flaming wall of radiated guitars. “The Good And The Bad” finds Moore plucking out a brilliantly see-sawing bass line and Gordon and Ranaldo stroking out articulate guitar klang as the group forge an ebbing and flowing aural organism that seemingly wants to destroy passersby. This shit is ominous, and at nearly eight minutes, it foreshadows Sonic Youth’s future forays into tumultuous, multi-movement epics.

Sonic Youth would go on to make much better records, of course, but this initial offering stands the test of time and is a riveting curio in this important group’s renowned, sprawling canon.

(The 2006 Goofin’ Records vinyl reissue includes a bonus LP of a live show from 1981, plus an early studio cut, “Where The Red Fern Grows.”) -Buckley Mayfield