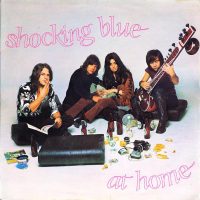 In America, Shocking Blue were archetypal one-hit wonders. And that one hit, “Venus,” is a definitive slab of sexy, late-’60s psych-pop that still gets the juices flowing. But you’d best believe these Dutch party-starters had much more to recommend them than that one global smash/ promiscuous chart-topper.

At Home offers a motherlode of instant charmers that encompass the familiar tropes of the era’s accessible end of the trippy-rock spectrum. Robbie van Leeuwen was an expert craftsman of indelible hooks, which he embroidered with acoustic and electric guitars, sitar, bass, and drums that unerringly hit the sweet spot between radiofriendliness and opium-den seductiveness. Vocalist Mariska Veres imbued his catchy-ass compositions with a domineering sensuality that made every listener feel like a lust object.

It would be overstatement to call Shocking Blue an “important” band, but they remain a remarkably durable font of pleasure-inducing songs. “Love Machine” is a deceptively funky, frilly Doors-like ditty that contains the immortal line, “the love machine makes the world turn around.” Truth bomb. “Poor Boy” is the closest SB got to a legit psychedelic freakout, while “Love Buzz” laid the foundation for Nirvana to do a bang-up job with this slinky, lubricious come-on of sike-pop on Bleach, making van Leeuwen an even richer man. Shit, dude deserves all the lucre he can get with tunes as mesmerizingly musky as this.

At Home is a great place to start your Shocking Blue adventure. It’s fairly light entertainment, but damn, does it have staying power. (Trivia: Seattle boasted a Shocking Blue tribute band for many years called the Daemon Lovers. They were fantastic.) -Buckley Mayfield