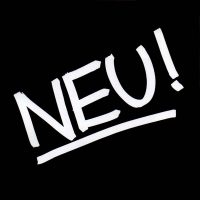 Of their indomitable holy trinity of albums, Neu! ’75 tends to be these krautrock legends’ most overlooked full-length. (The less said of their mid-’80s dud, Neu! 4, the better.) Neu! ’75 lacks the first one’s groundbreaking motorik epicness of “Hallogallo” and the grand industrial-rock grind of “Negativland” and the second one’s crazy experiments (out of necessity) and the monster jam “Lila Engel.” But Michael Rother and Klaus Dinger’s third LP has plenty of reasons to stake a claim in the canon—and in your record collection.

“Isi” zippily starts ’75 with one of Rother’s most uplifting guitar and keyboard figures while Dinger smacks out Autobahn-cruising beats that metronomically turn over with engineering-major elegance. While this song’s playing, you will sense that all is right with the world, despite mounting evidence to the contrary. “Seeland” has the distinction of being culture-jamming group Negativland’s label name and of evoking an absolutely aching strain of melodic gorgeousness, a sundown resignation of existential gravitas. Dig how Rother’s guitar eloquently wails with a Robert Fripp-in-Düsseldorf grandeur. However, “Leb’Wohl” might be Neu!’s dullest moment. It’s the aural equivalent of sleepy-time tea; the musicians seem to be nodding off in the studio while waves lap in the background.

But don’t fret. “Hero” comes barging in with some of Neu!’s most conventionally hard-rocking bravado, as Dinger snarls proto-punk vocals about a hero riding through the city after his honey went to Norway, new drummer Hans Lampe chops out a staunch “Apache” beat, and Rother kerrangs heroically, as it were. In a better world, “Hero” would’ve been a hit on rock radio. “E-Musik” continues the band’s irresistible, ascending chug to the heavens, coming off like a more conflicted, less streamlined version of “Hallogallo.” It’s a 10-minute tribute to relentless forward motion, with Rother sending arcs of golden six-string light over the choppy rhythm. The coda is baffling, though: a grotesquely slowed voice literally evincing a snore, followed by Rother’s guitar part from “Seeland” entering, backward. “After Eight” closes the album with an anthemic gush of mercurial motorik pummeling. I’ve never in my life more wanted to floor it down the highway on a Harley-Davidson… okay, except for Can’s “Full Moon On The Highway.”

’75 should’ve been the record that broke Neu! Into mass consciousness, but alas, they remained a cult act—albeit one of the most influential ever in underground rock. -Buckley Mayfield