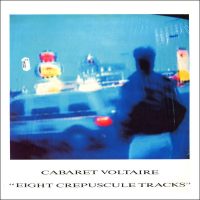 If you’re looking for a relatively easy, affordable way to get into Cabaret Voltaire, you should check out the Eight Crepuscule Tracks compilation. Gathering cuts from the English electronic group’s fecund 1981-1983 phase, this collection spotlights Cab Volt’s inventive industrial electro excursions. Think Throbbing Gristle, but with more danceable grooves and a greater propensity to sample American evangelists and menacing authority figures.

Composed of Richard H Kirk (who went on to a prolific solo career as a techno maverick), Stephen Mallinder (creator of the excellent 1982 LP Pow-Wow), and Chris Watson (who became a renowned field recordist), Sheffield’s Cabaret Voltaire began in the mid ’70s as experimental synthesists and collagists whose esoteric explorations you can hear on the 3xCD Methodology box set. By the time we get to the material on Eight Crepuscule Tracks, Cab Volt had morphed into a sinister outfit who want to make you twitch on the dance floor even as they’re inducing serious paranoia in listeners. They would go on to get even funkier and more techno- and house-oriented in the late ’80s and ’90s. But for my money, the early ’80s remain Cabaret Voltaire’s peak era.

The “Sluggin’ Fer Jesus” trilogy that opens Eight Crepuscule Tracks sets an ominous tone that epitomized Cab Volt’s enigmatically unsettling sound at that time. The first part’s an urgent, desolate shuffle that could be considered dance music, but it’s actually more of a soundtrack for a panic-stricken search for escape from a sinister plot. Part two’s a throbbing industrial nightmare scenario that would segue well into Throbbing Gristle’s “Hamburger Lady” or “Discipline.” “Fool’s Game – Sluggin’ Fer Jesus (Part Three)” features a slurred, ill rap by Mallinder over a malignant strain of electro-funk laced with queasy synth horns. Electro-funk is typically party music, but in Cabaret Voltaire’s hands, it’s a soundtrack for running through back alleys in terror. They loop a white American man shouting, “We’re sick and tired of hearing about all the radicals and the perverts and the liberals,” as Mallinder’s bass methodically describes a tight, head-nodding groove that works on a subliminal level.

“Yashar” is a galloping slice of Middle Eastern-inflected dystopian disco that will appeal to Severed Heads fans. The track’s innate paranoia intensifies every time the movie-dialogue sample, “There are 70 billion people over there.” “Where are they hiding?” surfaces. “Your Agent Man” pits unnerving, warped funk with automaton vocals, as it reflects the recurring CV theme of surveillance and espionage. Think Throbbing Gristle’s “20 Jazz Funk Greats” melded with Gil Mellé’s pestilential Andromeda Strain soundtrack.

“Gut Level” and “Invocation” make excellent diptych of eerie, percolating funk, with the former full of urban-aggro movie dialogue and the latter augmented by solemn monk chants looped into a liturgical drone. The comp climaxes with “Theme From ‘Shaft’” as CV convert the 1971 blaxploitation-funk smash hit into a hazy, cold-sweat chiller-thriller score. With the vocals pitched down to a creepy mutter, it’s practically Residents-like. I wonder what Isaac Hayes thought of it… if indeed he ever heard it. -Buckley Mayfield