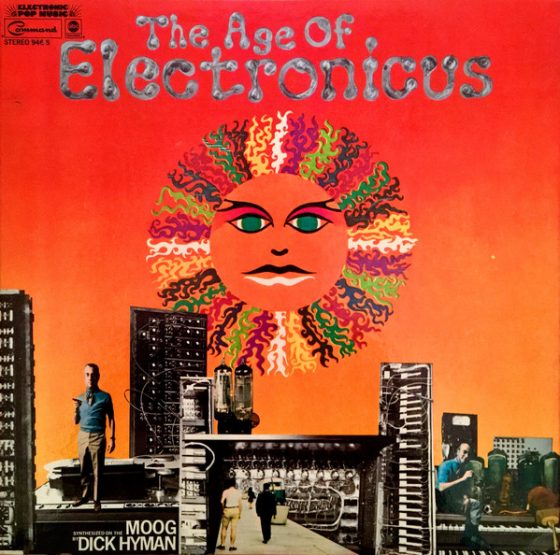 Even some of the best Moog albums have a fair amount of cheesy camp elements littering them, and Dick Hyman’s The Age Of Electronicus is no different. While Robert Moog’s invention tends to time-stamp music with as much finality as Auto-Tune has done in this century’s first two decades, some of the former material has endured beyond cheap nostalgia thrills. And that includes this cover-heavy opus.

Now a spry 92, Hyman was 42 when Electronicus came out, and he’d established himself as a jazz pianist who once played with Charlie Parker. Dick also was the in-studio organist for the stunt game show Beat The Clock, which sounds like a very fun gig. So, dude has chops. He applied his dexterity and ingenuity to the then-novel Moog synthesizer with both virtuosity and opportunistic glee.

Electronicus boasts the obligatory Beatles covers (“Ob-La-Di, Ob-La-Da” and “Blackbird”), two Booker T. & The M.G.’s cuts (“Time Is Tight” and “Green Onions”), Hair show-stopper “Aquarius,” an interpretation of James Brown’s “Give It Up Or Turn It Loose,” a rendition of Joni Mitchell’s “Both Sides Now,” and merely one original. Sure, Electronicus smacks of Moog-hysteria cash-in, but Hyman’s inventiveness with this familiar and relatively eclectic material raises the record high above most of its counterparts now moldering in bargain bins.

The album starts with one of the Beatles’ most insufferable tunes, “Ob-La-Di, Ob-La-Da,” and Hyman squirts chintzy Moog sauce all over the gratingly ingratiating dud. Thankfully, this poor start’s obliterated by the über-funky “Give It Up Or Turn It Loose,” which has more freaky libidinousness than you’d expect from suit-and-tie-wearing, middle-aged white guy who likes to twiddle nobs. Yeah, I’ll still drop this heater into DJ sets. “Blackbird”’s solemn beauty survives Hyman’s wonky timbres and insistent, synthetic pulsations—barely. I bet McCartney dug it.

“Aquarius” is “Aquarius”; it’s hard not to smirk when any version of it is playing. Hair-raising it isn’t. However, “Time Is Tight” and “Green Onions” strut with alpha-male bravado while flaunting extremely flute-y tonalities. Hyman finds a quite annoying setting on the Moog for the folk standard “Both Sides Now,” so I usually skip over it. The sentimental Bacharach-David movie theme “Alfie” fares a bit better, but is still inconsequential. However, the lone Hyman composition, “Kolumbo,” is an epic excursion into complex, swarming oscillations and delayed percussion. It’s by far Electronicus‘ most serious and psychedelic effort. I wish Hyman would’ve unknotted his tie and frolicked in this direction more often.

One good thing about Electronicus: It hasn’t become a hipster totem nor received a fashionable deluxe reissue, so you can still find used vinyl copies for under $10… for now. -Buckley Mayfield