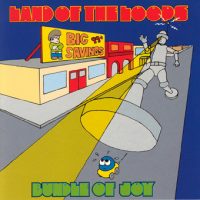 Seattle-based indie label Up Records put out some overlooked gems during its 1994-2008 run. One of the finest and quirkiest is Bundle Of Joy by Land Of The Loops (aka East Coast musician/producer Alan Sutherland). Deploying beats, bass lines, and synthy FX as well as guest singers and an array of samples, Land Of The Loops created a wonderful hybrid of bedroom indie-pop and hip-hop. Bundle Of Joy is probably Sutherland’s peak.

The aptly titled “Welcome” starts as a kooky collage, before some of the fattest, funkiest beats ever to appear on an Up release (is that Billy Squier’s “The Big Beat”?) enter the fray. These beats engage the delayed, dulcet vocals of Simone Ashby in a cagey duel in a cut as minimal as early Run-D.M.C. Ashby resurfaces on the phantasmal, disorienting “Burning Clutch (five-speed dub),” her vocals recalling the dreamy tenor of Dorothy Moskowitz of the United States Of America. What a heady trip.

Speaking of guest vocalists, Beat Happening’s Heather Lewis appears on “Growing Concern,” delivering her trademark child-like vocals over an easygoing funk charmer, bestowing a distinctly PNW innocence to the album. She also adds darling singing to the sparkling, stuttering funk of “My Head (leaks)” and to “Cruisin’ For Sentient Beings,” which is powered by a classic, urgent break (close to Skull Snaps’ “It’s A New Day,” but not it) that you’ve heard on at least a dozen hip-hop tracks. Nevertheless, the results are fresh.

More evidence of Sutherland’s kaleidoscopic vocal sampling trickery occurs on “Mass Ave. And Beyond,” on which he sprinkles enchanting bleeps and bloops over a starkly funky foundation, and “I Dream Of Ghosts,” which evokes the eerie, spacey dub of early Seefeel, thanks to the sampled angelic sighs. Perhaps LOTL’s best-known track, “Multi-Family Garage Sale (bargain-bin mix),” presents ludicrously bubbly and loping suburban funk with a staccato female vocal sample, snippets of children talking (“Don’t leave me”; Where are we anyway?” etc.), and beats not unlike those in George Clinton’s “Atomic Dog.” No wonder Miller licensed the track for a beer commercial. I bet Sutherland significantly upgraded his studio after this transaction.

Other highlights include “Help For Your Aching Back,” a swirling, psychedelic workout that might should be playing in hipper chiropractors’ offices, and “Day Late & A Dollar Short,” a fantastic sampladelic agglomeration of Buddhist monk chants, children jauntily singing, twangy guitar from the James Bond theme, archetypal sci-fi analog synth emissions, and very rugged, funky beats. Play this in a DJ set and watch people lose their shit—while looking befuddled.

Discogs prices for Bundle Of Joy have jumped up in recent years. It seems odd that no label’s reissued this wonky wonder since its first issue 23 years ago, but perhaps this review will nudge somebody into doing that. (Gotta dream big!) -Buckley Mayfield