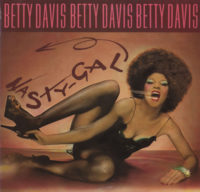 Betty Davis (1973) and They Say I’m Different (1974) are such flamboyant juggernauts of funk and soul that they overshadow all that came after. But Ms. Davis (née Mabry, ex-wife and muse of Miles Davis) still had plenty of creative fire in her belly, as her “difficult” third album, Nasty Gal, proves. This X-rated singer/songwriter may have lost Sly & The Family Stone drummer Greg Errico and bassist Larry Graham, Headhunters drummer Mike Clark, and Santana guitarist Neal Schon from the first two LPs’ lineups, but she still dropped gems with regularity. So while the band she enlisted for Nasty Gal may not be as renowned, but it is damned tight.

You can suss that from the first few seconds of the title track: seething, filthy funk apropos for its titular subject. Davis shifts from guttural growl that telegraphs feral lust to seductive purrs as the guitar, bass, drums, synths, and congas bump and grind with pornographic single-mindedness. The libidinous, swaggering funk of “Talkin Trash” evokes Stevie Wonder’s “Higher Ground,” thanks to James Allen Smith’s clavinet-like synth squawks. That seductive, squelchy sound recurs throughout Nasty Gal like a mating call.

“This Is It!” is slamming, thrusting funk that takes no prisoners—so lusty, it could make even men pregnant. “F.U.N.K.” telegraphs its intent, serving as Davis’ manifesto for the funk genre while big-upping her musical inspirations (Stevie, Sly, Tina Turner, Ann Peebles, Al Green, Barry White, Isaac Hayes, O’Jays, Jimi, Aretha, Chaka, the Funkadelics [sic]). “Shut Off The Light” bears uncanny similarities to the lubricious funk romp “Turn Off The Lights” from Larry Young’s Fuel LP (which also came out in 1975 and which I also reviewed on this blog). Great minds think alike, for sure.

To show she’s not strictly sex-obsessed, Davis wrote “Dedicated To The Press,” a sarcastic dig at the media set to a throbbing, bubbling funk attack. Betty seems quite worked up about critics’ inability to understand where she’s coming from. Sadly, that’s what happens when you’re too far ahead of your time.

The only real dud on Nasty Gal is “You And I”—shocking, because this should’ve been a highlight; it was co-written with Miles and boasts brass arrangements by Gil Evans. Instead, it’s a somewhat limp ballad with Betty at her most tender and sincere. Curiously, this stab at serious airplay didn’t succeed.

That Betty Davis remains more of a cult icon than a household name on the level with Tina or Chaka might derive from her being too sexy and in your face for most heads to handle. Luckily, you sexy readers are more than up for the task.

(The good folks at Light In The Attic Records reissued Nasty Gal in 2009, so it shouldn’t be too hard to find—or very expensive.) -Buckley Mayfield