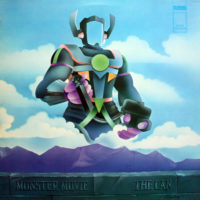 Choosing a favorite Can album is like pinpointing your favorite orgasm—damn near impossible, but fun to contemplate. As with many things music-oriented, it depends on your mood. One of the great things about these German geniuses (plus their American and Japanese vocalists) is how different each LP is. On any given day, your fave could be the unique funk bomb of Ege Bamyasi, the aquatic space-out of Future Days, the psych-rock/musique-concrète amalgam of Tago Mago, the proto-techno rhythmagic of Soon Over Babaluma, the alien dub and robo-funk of Flow Motion, or the raw-nerved, Velvet Underground-inflected trips and trance jams of Monster Movie. Or yet another one. Choose your adventure, etc.

My lifelong love affair with Can—whom I consider the greatest rock band ever—began with Monster Movie in the very early ’80s. I was smitten from the first seconds of “Father Cannot Yell,” which is a skewed, avant-garde take on the Velvet Underground at their most adrenalized—but with a loose-cannon, African-American sculptor on vocals instead of a NYC hipster. Nothing else really sounded like this in 1969: Holger Czukay’s ominous pulsations of sinewy bass; Jaki Liebezeit’s robust, tricky beats; Irmin Schmidt’s synapse-sizzling keyboard fibrillations; and Michael Karoli’s radiant guitar; Mooney’s spluttering of a disturbing, primal, parental scenario. “Father Cannot Yell” is not so much a traditional rock song as it is a surge of panicky energy that makes you think earth is spinning off its axis.

The next track, “Mary, Mary So Contrary,” ushers in a 180º shift to slack, clanging rock in the vein of the Beatles’ “Strawberry Fields Forever” and Cream’s “World Of Pain.” Karoli’s articulate guitar lead whines and snakes through the song like a tortuous siren and is underpinned by Liebezeit’s emphatic, deceptive funk beats. Mooney’s obsessive, lyrics about the titular woman are strange, but this might be the most conventional love song in Can’s canon, outside of “She Brings The Rain.” “Outside My Door” features a wonderfully doleful train-whistle harmonica wafting over a spasming psych-rock roar that’s somewhere between 13th Floor Elevators ca. Bull Of The Woods and Mass In F Minor-era Electric Prunes. Mooney looses a stream of discombobulated consciousness in which the standout line is “Any color is bad.”

Monster Movie climaxes on “Yoo Doo Right.” A 20-minute Ouroboros jam of throbbing intensity and sublime subterranean tremors, this is really Holger and Jaki’s show. The formidable rhythm section creates an undulating foundation of low frequencies, heavy on the bass twang and tom-toms, over which Schmidt’s keys and Karoli’s guitar fill the firmament with aching drones that hint at VU’s “Black Angel’s Death Song.” Mooney sings about his lust-object mantras as if possessed: “once I was blind now I can see/now that you’re in love with me/you made a believer out of me, babe/you made a believer out of me/she said, ‘yoo doo right, yoo doo right.’” At around 8 minutes, the song reduces to rimshots and Mooney sadly intoning the lyrics for a minute; then the rest of the band resume forging periodic swells of keyboard burbles and a fuzzed-out guitar riff that’s like a fanfare for an advanced civilization. Czukay and Liebezeit continue to build a mountain of rhythm out of bare necessities. Mooney’s OCD rants and tender singing capture the mindset of a man in an agitated state of romantic thralldom. It’s an exhausting yet exhilarating trip.

Monster Movie contains some of Can’s most straightforward rock moments, but also their most prodigious improv epic (just nudging out “Halleluwah”). It’s a start-to-finish mind-bender and a rewarding entry point into their incomparable catalog. -Buckley Mayfield