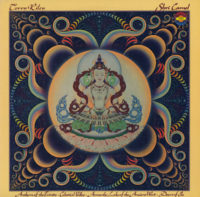 Now, the great thing about this master of minimalism and mesmerism is that you can dip into almost any record in his discography and find succor. I’m partial to anything Riley’s done from the ’60s to the ’80s. And that’s where Shri Camel falls. Commissioned by West Germany’s Radio Bremen in 1975, Riley started composing it that year and performed an early version of Shri Camel in Bremen the following year. In 1977, Riley cut a different iteration of the work, dividing it into four suites at a San Francisco studio. For some reason, CBS didn’t issue the recording until 1980. Better late than never, he understated.

Using a modified Yamaha YC-45D combo organ tuned in just intonation and augmented with digital delay, Riley applied lessons learned from Indian raga guru Pandit Pran Nath, especially regarding “singing in search of swara, or ‘the knowledge of profound pitch relationships which reigns supreme,’” as Hugh Gardner put it in the liner notes. Suffice it to say, Riley synthesized Nath’s ancient wisdom with modern technology and his own spontaneous creativity to summon a zoner for the (s)ages.

Seemingly sputtering out of a golden spigot in the holiest temple, album-opener “Anthem Of The Trinity” is a fanfare for a benevolent god who only wants you to feel buoyant, warm, and loved for eternity. Throughout most of Shri Camel, Riley dazzles up a momentous motif—a bass-y three-chord figure (da da DAAA)—that sounds as if it could be a sperm whale’s mating call. The track ebbs and flows from elation to sternness, with moments of warped turbulence. “Celestial Valley” unspools more introverted fractals of organ drones, spiraling inward to massage all of your chakras. At times, Riley’s organ swells to revelatory dimensions (no double entendre, sorry), generating flurries of vamps geared to excite and exalt your every atom. You wonder how much pleasure your head can endure under such an onslaught of heavenliness.

Obviously, there’s no way to maintain that level of highness, so Riley downshifts on “Across The Lake Of The Ancient Word” into a more somber feel, like the entrance music for the funeral of a benevolent cult leader. Riley embroiders that aforementioned bass-y three-chord motif with frantic bubbles of keyboard spume. It feels like you’re floating in an ocean of champagne. “Desert Of Ice” starts where “Ancient Word” left off, and then intensifies and embellishes it. Riley appears to be playing a vibraphone made out of said ice with an elegant swiftness that seems supra-human, à la Conlon Nancarrow’s player-piano works. The bass-y three-chord pattern’s urgency keeps surging into the increasingly ebullient organ carbonation, and Riley begins to improvise variations on the spacey theme, with every tonality contoured to levitate you light years from earthbound reality. This is how you close an album. Bow down to the master of aural transcendence. -Buckley Mayfield