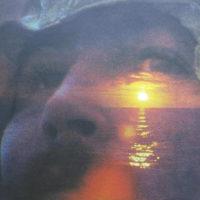 This major-label album has emerged through nearly five decades of fluctuating interest and apathy to become at once a bargain-bin staple and a cult favorite. You don’t see that happen very often. My used copy’s cover is torn and frayed as much as David Crosby’s life has been, and that ugly exterior somehow makes the music within the grooves seem that much more special.

If I Could Only Remember My Name arose in the aftermath of Crosby’s emotional devastation following the death of his girlfriend, Christine. The former Byrd was eight miles low when he entered the studio. Emotionally and artistically buoyed by friends in high places (and high friends in spaces), Croz manifested a record that was like a miraculous mirage of folk-rock jamming and heart-string-tugging lyrics.

Name might have been the greatest pity party ever thrown, and it proved that a dozen or so millionaire musicians can set aside their egos and create an enduring work of healing spirituality, in order to mend a damaged psyche. It’s also the rare LP that has influenced middling indie-rock artists such as Devendra Banhart and Sufjan Stevens as well as delighted lovers of rarefied psychedelia.

It begins with “Music Is Love,” a pinnacle of hippie rock. The song rides an easygoing acoustic-guitar riff and hand percussion/handclap rhythm, bolstered by a simple, indisputable message/mantra: “Everybody’s saying music is love.” Everybody was saying no such thing back then or at any other time, but isn’t it lovely to think so? Through the pure beauty of the tune, though, it becomes a self-fulfilling prophecy. Written by Crosby, Graham Nash, and Neil Young, this tune must’ve made Stephen Stills very jealous.

Then comes the “Cowgirl In The Sand”-like “Cowboy Movie,” which sounds like a laid-back James Gang with its subtle, clipped funk undertow. Grateful Dead members dominate here, with Jerry Garcia on guitars, Mickey Hart on drums, Phil Lesh on bass, Bill Kreutzmann on tambourine. Over their Haight-Ashbury groove, Crosby relates a harrowing tall tale about an Indian woman who’s not what she seems. Not sure this track needs to be over eight minutes, but maybe the drugs were kicking in real nice when Croz and company cut it. “Tamalpais High (At About 3)” is a mellow, wee-hours CSN tune with gorgeous wordless vocal harmonies—a motif on Name. With Nash joining Croz on vocals, the song goes airborne thanks to Garcia and Jefferson Airplane/Hot Tuna guitarist Jorma Kaukonen unspooling liquid gold filigrees.

For a lot of people (maybe even me), “Laughing” is the LP’s peak. You have the goddess Joni Mitchell and Nash on silken backing vocals, Garcia getting glorious on pedal steel, Phil Lesh on bass, and Kreutzmann on drums. They all lock into synch for this languorous sigh of a song that’s like a more rhythmically easygoing version of “Cowboy Movie.” Think of it as the aural analogue to the LP cover, on which the descending sun glows above the ocean that’s superimposed over Crosby’s pensive stare. The album’s most menacing track, “What Are Their Names” starts with spare, “Dark Star”-esque intrigue, thanks to Garcia’s spindly, stellar picking. With Mitchell, Grace Slick, Paul Kantner, and David Freiberg on backing vocals, Croz and the crew intone lyrics about the evil men who run the country/world. Timeless stuff, unfortunately. Bonus: Seattle resident and Santana star Michael Shrieve’s on drums.

The album’s final four songs are marked by some of the most beautiful and majestic vocal arrangements and performances of the ’70s. The traditional “Orleans” is a showcase for Crosby’s soaring choirboy voice and delicately gorgeous acoustic-guitar strumming. You can hear its profound influence on Fleet Foxes, for what that’s worth. This track bleeds seamlessly into “I’d Swear There Was Somebody Here,” whose vocal origami of ancient-sounding majesty prefigures Dead Can Dance’s Lisa Gerrard. Yep.

There are fewer rougher bummers than losing a lover to death, obviously, but Crosby and his posse of West Coast all-stars turned the sourest lemon into the sweetest lemonade on If I Could Only Remember My Name. -Buckley Mayfield