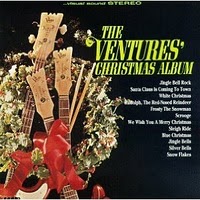 The Ventures, who seemed to crank out a dozen-odd albums every year during their heyday in the 1960s, released this gem in 1965. It distinguishes itself from its holiday brethren by using a mixture of two styles that should be antitheses of each other: the Christmas carol and surf music (or more fundamentally, winter and summer). Traditionally, the heart of each of these styles lies in evoking a mood. The danger in trying to evoke two moods simultaneously is that it might become a hokey mishmash (like those “Santa-in-a-Hawaiian-shirt” tourist trinkets for sale in the islands). Through the skill of The Ventures and their producers, however, the two are combined into a fairly seamless whole, both heartfelt and fun – a pretty nifty trick. As on their other surf records, the guitar tones of Don Wilson and Nokie Edwards are still king, but sleigh bells (more or less subbing for the hi-hat) and glockenspiel challenge for supremacy in the mix. This elf approves! Favorites from the album include the majestic “What Child Is This” and “Silver Bells.” –Wilson