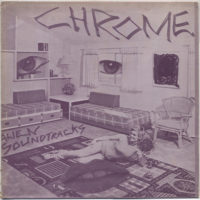 Alien Soundtracks was where Chrome became the Chrome over which freaks worldwide have been flipping their lids for over four decades. Following the solid yet fairly trad 1976 debut LP The Visitation with founder Damon Edge at the controls, Alien Soundtracks is the San Francisco industrial-psychedelic-rock band’s first record with the uniquely blasted guitarist Helios Creed in the lineup. And what a difference he made.

Album-opener “Chromosome Damage” fades in as if rising from a pit, then clicks into an accelerated, warped rock attack that reeks of rocket fuel and amphetamines. Edge croaks, “I wanna fly, I wanna fly away” before the song just fades out and morphs into a nightmarish, backward-sucking inversion of French psychonauts Heldon. Creed’s guitar sounds like if Jimi Hendrix were irradiated with Strontium-90; Helios forges some of the sickest tones ever to be associated with the mundane term “rock.” The lysergic intro of “All Data Lost” leads into a skittering, Jaki Liebezeit ca. Tago Mago ratatat and Edge’s voice downshifts into a Syd Barrett-like murmur that ripples into infinity. “SS Cygni” finds Chrome at their funkiest, but this is the hypnotic machine chug of This Heat more than it’s the bon vivant strutting of James Brown or the Meters. ‘Tis a pity it doesn’t last at least three times longer. By contrast, “Nova Feedback” is eerie, menacing, and woozy, as Creed peels off proggy, contemplative riffs that contrast with the doom-laden business roiling below. It’s a masterpiece of chiaroscuro.

The strangeness does not let up on side 2. “Pigmies In Zee Park” unloads helter-skelter guitar, percussion, synths, and mysterious vocal consternation before a gong hit produces a segue into a Floydian head trip. Edge dares a grotesque mockery of a Johnny Mathis croon about “pigmies [sic] in the park by the zoo waiting for you.” It’s damned creepy. Finally, things shift again into a manic, automaton shuffle, like a threshing machine operating in triple time. The move epitomizes Chrome’s masterly madness. “Slip It To The Android” almost comes across as a novelty-dance track, with its bustling bongo-like beats and insectoid Moog buzzes, but Creed’s needly guitar solos and Gary Spain’s Jean-Luc Ponty-esque electric-violin riffs reveal Chrome’s rarely noted Frank Zappa influence.

The methodical funk of “Pharoah Chromium” could be early Black Sabbath covering Funkadelic’s “You And Your Folks, Me And My Folks,” with an articulate, anguished Creed solo glazing this strange trudge. It sounds as if Helios let second guitarist John Lambdin take lead on “ST 37,” a Residents boogie cross-hatched with all sorts of wonky synth tones and percussion timbres. It was distinctive enough to inspire a ’90s Texas band to name themselves after it. “Magnetic Dwarf Reptile” is as bizarre as its title, and it enables Creed to flaunt that muted, radiated tone that hovers in the region of Richard Pinhas’ axe work for French sci-fi-obsessed psych juggernaut Heldon. Here and elsewhere, Creed proves he can finesse exceedingly precise arabesques or unleash massively distorted riffs that dwarf Tony Iommi’s.

That sound would dominate the essential 1979 follow-up, Half Machine Lip Moves and other otherworldly classics such as 3rd From The Sun, but all of Chrome’s ostentatious mutations cohered most rewardingly on Alien Soundtracks.

(Alien Soundtracks has been reissued on vinyl four times. A word to the wise, though: Avoid the Cleopatra editions—which is good advice in general for any release.) -Buckley Mayfield