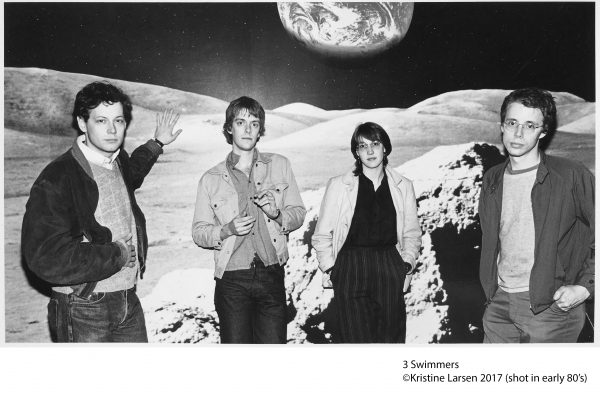 THE WORKER WORKS TO LIVE
3 SWIMMERS 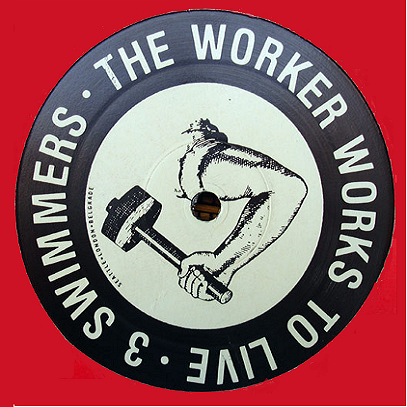 The band that would become 3 Swimmers rose out of the ashes of The Beakers-probably the first Olympia WA band that made the town the musical gravitational force it has become today.  Other contributors to the early Olympia scene-and later contributors to the overall NW music scene- included DJ/editor/musician John Foster and the alarmingly underappreciated producer Steve Fisk. Both were early champions of the local scene, and had been students at The Evergreen State College just outside Olympia. TESC, as it’s often known was at the time a free-wheeling liberal arts college that pushed students to express their social and artistic endeavors to the maximum.

As well as Fisk and Foster, the college produced well-known graduates like Bruce Pavitt (Sub Pop) Matt Groening (The Simpsons) artist/cartoonist Lynda Barry (Ernie Pook’s Comeek, the illustrated novel The Good Times are Killing Me as well as the iconic image “Poodle with a Mohawk“). Later alum include Bill Hagerty (aka Macklemore of Ryan Lewis and Macklemore) and the pro-Palestinian advocate and martyr Rachel Corrie. A cadre of musicians, filmmakers, early video artists, writers, activists, idealists and excessively talented and motivated individuals emerged from the college. Many of them collaborate off and on up til this day.

The Beakers had had some great underground success based on the strength of only one single, the Bill Reiflin produced Red Towel b/w Football Season Is In Full Swing. Bill was the drummer for the near-mythic Seattle band, The Blackouts, and later worked with Ministry, Revolting Cocks, KMFDM, REM, Minus 5 as well as a myriad of other projects. He would also become a couple with-and marry Frankie Sundsten during the late 1980s. As of August, 2017 Bill is a member of the reconstituted King Crimson.

The Beakers label, Mr. Brown Records was a project of the Lost Music Network headed by the aforementioned DJ, chronicaller of underground music and founder of the influential OP magazine, John Foster A couple of inclusions (Figure 21 and I’m Crawling (on The Floor) appeard on Foster’s 1980 “Life Elsewhere EP and in 1981 The Beakers song What’s Important was incluced Pavitt’s Sub Pop 5 cassette release. A rather dull (for The Beakers) rendition of Lipps Inc. Funky Town is out there in the internet ether, but ultimately it doesn’t represent the sound of the motif of the band. The Beakers were angular, sometimes chaotic and sparse, with vocals by Mark H. Smith, drummer George Romansic, bassist Francesca (Frankie) Sundsten and the wildly manic saxophone of Jim Anderson who also shared vocals. This formula would transfer nicely when 3 Swimmers was founded. 3 Swimmers retained much of the angularity (especially in Smith’s vocals) but the sound was a bit more refined and not as purposefully caustic. Whereas The Beakers were shining lights among the underground, 3 Swimmers’ sound was more accessible to mainstream audiences, and the ever important college DJ’s who could break a band within weeks.

After a year of mostly success, touring and opening for major acts The Beakers called it quits. Each of the members would pursue projects of their own, but remain involved in one another’s projects. Frankie pursued her main love-painting, and became a member of Children of Kellogg along with Annie Mulcahey, a longtime fixture on the Seattle scene and experimental provacateur, Sue Anne Harkey who would later find success with one of her highly experimental ongoing groups, Audio Leter. Jim Anderson became involved in several music projects including Little Bears From Bangkok (with occassional drumming by Romansic. He also devotes himself to social justice and political causes. In 1981 George Romansic and Mark H. Smith would go on to be founding members of 3 Swmmers, eventually coelescing into Romansic on drums, Smith on Vocals, guitars and synths, Fred Chalenor on bass. Chalenor had worked with avant-garde artists like Wayne Horvitz, and after 3 Swimmers he co-founded The Tone Dogs with Amy Denio, and later included Soundgarden drummer Matt Cameron. The original 3 Swimmers line-up also included Colin McDonell of Cinema 90 and The Macs Band (alongside brother Angus). McConnell had been label-mates with The Beakers earlier at Mr. Brown Records. After 3 Swimmers recorded their first EP, The Worker Works To Live (1982, Engram Records) McDonnell departed the band to pursue solo projects and production. Shortly after McDonell bowing out MacKenzie Smith was brought on to play keyboards and take on some of the vocals. Taylor Nelson Little shared drumming duties with George Romansic, and Craig Florey, another Seattle stalwart joined as the groups saxophonist. Mark H. Smith recounts


“Taylor Nelson Little from Vancouver was just the best drummer we could find, we didn’t care that he lived in Canada. He and Fred really locked in together, which was critical because we were a groove-oriented band. We added Craig Florey on sax because he was irresistible”

A second EP-also on Engram-American Technology (also released by Engram Records in 1982) brought even more attention to the band and they ended up touring on their own and as opening acts for international headliners, most notably Gang of Four, with which they shared a socially conscious, perpendicular, jagged and jarring sound-and ideals…at least the sound and ideals found on Gang of Four’s first outing Entertainment. The sweeteners, back up singers and highly produced sound of later Gang of Four releases was not a direction 3 Swimmers would take.

“We were young” says Smith. We wanted to do things differently. We wrote the songs together. Made business decisions together. It was very much a collective. And I think the pressure of trying to do what we were trying to do caused some strain”.

Still the band weathered it out until Fred Chalenor yearned for a different direction for the band. According to Smith;

“When Fred, who is a genius bass player, decided he wanted to put his energy into more experimental music, the band fell apart. From the very beginning he was the key component to the 3 Swimmers sound. He was irreplaceable”.

Somewhere out there another full EP of completed recording remains. Smith believes it’s the best thing 3 Swimers ever recorded. It remains unreleased and will probably never see the light of day. That’s unfortunate. Despite some criticism of the band being derivative (they weren’t) and Mark’s vocals as somewhere between “a hysterical David Byrne or an illiterate David”(they were) 3 Swimmers still stand out even among the stratospheric talent found among 80s Seattle bands. After the band’s demise MacKenzie Smith would go on to become Associate Director for Technology at MIT. She’s recently moved on to teach at UC Davis. George Romansic passed away on Sunday January 25, 2015, after a months-long battle with cancer.  He remained bright, generous and kind up ’til the end, and is still mourned by family, friends and just about anyone who ever met him.  He will continue to be remembered, honored and missed for many, many years. In a tribute to her friend, Patti Smith dedicated the song “Beautiful Boy” to George at a performance she gave in Seattle the night after George’s passing.

Mark H. Smith now is an assistant professor in the MFA program for Writing and Writing for the Performing Arts at UC Riverside, Palm Desert Graduate Center. He’s a regular contributor to journals and newspapers around the country and an accomplished novelist. His newest book, Blown, is due in the summer of 2018. He still remembers the importance 3 Swmmers made in his life and career. He says:

“For an indie band playing slightly annoying music from the northwest corner of the country, we came close to some kind of success. We supported some great bands like Gang of Four, Duran Duran, and Bow Wow Wow. We played Los Angeles with the Gang of Four, we had meetings at Warner Bros and IRS records. But listening to the songs now, I really wish someone had suggested I take singing lessons. I am a terrible singer”.

Despite their short run 3 Swimmers were not just “could have beens“. They played intricate, but enthusiastic music to live audiences. There recorded output almost perfectly captures their sound. And despite what Smith has to say about his voice, I for one am very happy he never took singing lessons.