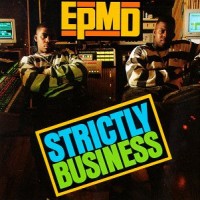 From all the rappers that came out in 1988, one of the more notable, influential and legendary is EPMD. Short for Erick and Parrish Making Dollars, the duo made up of Erick Sermon and Parrish Smith released their official debut album in 1988, named Strictly Business. As rappers, they do hardly anything more than bragging but their chemistry is so awesome and they have plenty of quotables and cool verses to rap to. They are not on the level of Rakim or Big Daddy Kane but they are pretty nice to listen to. The production for Strictly Business is what makes this album legendary though. Wanna see where funk in hip-hop got it’s start? Look no further than Strictly Business. You have heard songs like “Nastradamus”, “Ain’t No Nigga” and “Going Back to Cali”, right? Who do you think sampled them first? The answer is found right here with Erick Sermon. His funk inspired production is simply ahead of it’s time. Even though funk was a lot more popular in the west coast, it got it’s real start in Long Island with Erick Sermon. The funk samples are pretty simple and mostly looped on the songs but they are so awesome, they remain timeless. I can’t imagine this album being hailed as a classic had it not been for the great production. Funk in hip-hop got it’s real start right here (and alternatively on Life Is… Too Short from the same year). There’s also the original series of a story in song form with “Jane”, a hooker that never leaves the duo alone and would have a song dedicated to her in every EPMD followup. –Prt Cpt