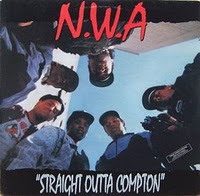 I’ll have to put my vote in as this record being my favorite hip-hop/rap album of all-time. Just like the Sex Pistols and Black Flag before them, this was right in your face and hard to ignore. Comes off a show-stopper, the go for broke style is so real and scary that it makes you feel you’ve been pistol whipped into oblivion, and yet you come back for more. From the superb opener “Straight Outta Compton” to the anger fueled “Fuck Tha Police,” this was hardcore music. Many of the tracks contain some very graphic lyrics, but there is a certain level of playfulness to the album as a whole. Make no mistake, this is not a kids record. It’s gritty subject matter and harsh lyrics bring it to life in a fearsome yet passionate way. Filled with tormented material, “Express Yourself” can be fun at times and “Gangsta Gangsta” is a hell of a song. Ice Cube, of course is the real standout here (even surpassing Dr. Dre). His lyrics and anger are the most dazzling throughout the record (note – he wrote most of the lyrics on the album). I was too young to remember the impact this had on society back in 1988, but today it remains the greatest hip-hop album to exist. –Jason