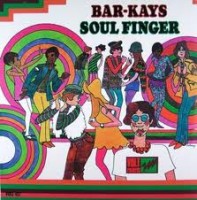 Funk’s advent was the result of a convergence of many musical events, a “perfect storm” precipitated by the coalescing of all the major postwar African-American musical forms, among them jazz, blues, r&b, and gospel. Like many other innovations in American popular music, it came into its own in the ’60s. Its evolution can be heard in the output of musicians from just about every major US city, but Detroit, Philadelphia, Memphis, and New Orleans (see below) were the real hotbeds of activity. But if there is one individual who can be seen as the form’s prime architect, it’s a man from Macon, Georgia by the name of James Brown. Accentuating rhythm above all else, and essentially making his backing band, the Famous Flames, a massive percussion instrument, the Godfather laid the groundwork for The Groove. This proto-Funk sound exists in some shape or form on just about all of his King Records releases from Papa’s Got a Brand New Bag onwards. But many of his peers were also throwing down. Here’s a short list.

1. The Bar-Kays Soul Finger (1967) Though there are other great tunes in this assortment of instrumentals, its title track, with its thumping bass and blasting horns, is deservedly the standout. Even the record’s unavoidable association with one of the greatest tragedies in Soul music history—it’s the only one the original lineup recorded before  three of its members perished with Otis Redding in a plane crash—can’t  detract from its joyous groove.

2. Sly and the Family Stone Dance to the Music (1968) This sophomore effort by the Bay Area psychedelic soulsters is where they really find their footing. Much more of a group effort than Sly’s later work, its melding of fuzzed-out guitar, stinging brass, life-affirming vocals, and the stellar basswork of one of funk’s greatest innovators, Larry Graham, ushered in a new era.

3. The Meters (1969) – No other city is as deserving of the title “The Cradle of Funk” as New Orleans. In the late ’60s, literally hundreds of artists in that city cooked up potent stews of tight grooves and fat beats, and the Meters were the undisputed head chefs. Their Allen Toussaint and Marshall Sehorn-produced debut features a smoking collection of instrumentals, including the original version of “Cissy Strut”, now a Funk standard.

4. Eddie Bo and the Soul Finders The Hook and Sling (1997) Elsewhere  in the Crescent City, this prolific national treasure, whose output spanned  from the early 50s to just a few months before his death in 2009, unleashed one of early Funk’s catchiest numbers, “The Hook and Sling”—a sizable  hit on the R&B charts in 1969. Every bit as much of an innovator as his peers, Bo unfortunately remained in their shadows for most of his career.  Even stranger, he never managed to cut a full-length LP during this, his most important, period. This 1997 compilation serves as the next best thing.

Further listening: Let’s face it: Funk is really a singles medium. It’s an unfortunate fact that many records from its golden era were hastily thrown together affairs. A typical LP might contain one or two amazing tracks scattered amongst some lackluster mid-tempo numbers and cheesy ballads. (Yes, we’re talking about you, James Brown!) This is where one can be thankful for the modern miracle called the compilation. The music industry initially was slow to recognize it as a genre fit for this type of (re)packaging, but by the mid-90s stylishly packaged funk compilations were a common sight in even mainstream record stores. Many of these are riddled with overplayed hits, so one is advised to dig deep. The Brits seem to do them the best. The London-based Soul Jazz Records sets the gold standard for comps and reissues. Their three volume New Orleans Funk series is an essential intro to some of the best music from Funk’s early days. Similarly, BGP’s Superfunk series is uniformly great. –Richard P

One comment on “Funky From Now On:
A Guide to Funk, Part I “Proto-Funk””