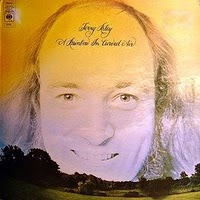 Future Holden Caufields, venturing out into the big bad city just two decades later, would have no need to feel so alienated — not with Central Park Be-Ins to take part in and Terry Riley’s A Rainbow In Curved Air providing the imaginary soundtrack. Riley’s LP – produced in ’67 once again by Music Of Our Time overseer David Berhman- is the most blatantly pop-friendly of all experimental albums up until Philip Glass’s Glassworks (the latter designed for an upscale yuppie audience which didn’t exist at the height of the Vietnam war.) No such compromises on Riley’s part–his loose, drony improvisations, heard here in gloriously overdubbed three dimensions, appealed to eager, young ears opened up by the raga craze and all sorts of other Eastern “space.” And despite his benign, hippie veneer, the composer didn’t neglect the dark side of Aquarius either, as the ominous psychedelic swirl of “Poppy Nogood & The Phantom Band,” with its dense overlay of reeds, organ and tape loops, demonstrates ad infinitum. –SS