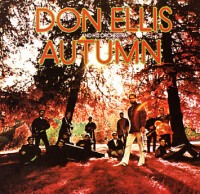 Brilliant American trumpeter, composer, arranger, and bandleader, Don Ellis led a superb Big Band, which was one of the most outstanding Jazz ensembles in the late 1960’s and early 1970’s. Eons ahead of its time, Ellis’ fascination with uneven meters and World music influences made his music truly revolutionary and fresh and the music lost nothing of its relevance over the years. He also had a rare talent to pick up the best musicians for his band, mostly forward-thinking individuals, ideally suited for his unusual approach to music and brilliant instrumentalists. Some of the musicians playing on this album are saxophonists Frank Strozier and John Klemmer, trumpeter Glen Ferris and many more outstanding musicians. The brilliant music was all composed by Ellis, except one Charlie Parker standard. At its full might the orchestra sounds like nothing else before or since, with every instrument perfectly fulfilling its role. Two of the six tracks were recorded live and show the orchestra as one of the most exciting live acts at the time. It’s fascinating to read the album’s liner notes written by Al Kooper, who was Columbia’s A&R manager at the time, describing the Don Ellis experience at the time. This is an absolute must to Jazz  fans, but all music connoisseurs should find this music fascinating. —Adam