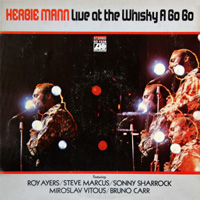 Oh my Lordie is this record a slab of righteous funky soul jazz. With Roy Ayers and Sonny Sharrock in the lineup, how can you go wrong? Although they had been with Herbie for a while by now in variations of this lineup, this record is quite a few shades funkier than earlier efforts like Windows Opened. It’s comprised of only two long tracks on each side, with crisp engineering and production by the Atlantic team of Bill Halverson and Sr. Ertegun. The first tune is a mid-tempo sizzler, electric bass from Miroslav Vitous locking in nicely with drummer Bruno Carr, and some understated percussion work from Herbie when he’s not riffing on flute. There’s plenty of room for all the soloists to stretch out on this one, although Sharrock restrains himself to chugging along in a loose but tasty two-chord rhythm part. He lets loose his free-jazz guitar on the next track, however — the upbeat ‘Philly Dog,’ a tune written by Rufus Thomas and famously recorded by the Mar-Kays a few years earlier. Their version tops out around 3 minutes; this one stretches out about ten minutes longer than that. While Sonny Sharrock’s own work over the next few decades is undoubtedly more challenging and avant-garde than anything he recorded with Herbie Mann, I have to say I really, really enjoy his bursts of madness over the organic and tuneful funk grooves of the records they made together, when he comes blasting in like a furnace. Roy Ayers is, well, Roy Ayers, and makes the addition of anyone on keys to this live setting completely unnecessary. I tend to feel that Herbie Mann has been underappreciated in general – written-off by jazz purists early in his career as a sell-out, and often passed over by crate diggers in search of more obscure beats. He was definitely on a roll in 1969, with the amazing Memphis Underground LP also coming out that year. —flabbergasted