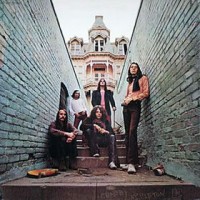 With a lot of obscure rock bands from the ’60s and ’70s you might be able to pinpoint that one ingredient the band may have been missing in order to grab hold of a large audience or get radio play. With Crabby Appleton, any listener should be at a complete loss for words as to how this band got denied the success they so richly deserved! The band’s 1970 debut for the Elektra label speaks for itself, and loudly at that. From the first cut to the last, there isn’t one musical misstep on this entire L.P.! It is truly a lost gem of the early power-pop genre. Led by Mike Fenelley who teamed up with local L.A. band Stonehenge to form Crabby Appleton, the band’s main strength was their irresistible pop rock sound, but there was much more to the band than just a Top 40 style garnered for mass appeal. How many pop-rock bands could also incorporate a Santana styled percussive section into their music and make it sound completely natural? Or suddenly break out into a little classical based prog-rock without missing a beat? That’s not to say you’re going to have to endure any over the top Santana jams or 30 minute Emerson, Lake, and Palmer solos with Crabby Appleton, just a pinch of each to liven up the mix. Rolling Stone magazine actually gave this album a crowning review when it was released and you know THAT’S saying something. I’m certainly glad I took a chance on this album because I was rewarded GREATLY! —M McKay