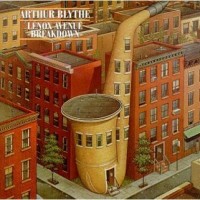 Not just a great jazz album, but a great album, period. First of all, there’s the fact that this little masterpiece slipped out in the period in which Branford Marsalis seems to think that “jazz just kind of died” which is a nice little thing in itself. But as a record, there’s not just great tunes and great playing here, though they’re there in spades, but the way it’s constructed from the uplift of the leading cut “Down San Diego Way” down to the darker, troubling “Odessa” is a thing of note as well. Rare are the jazz guys who work hard at constructing an album as a total listening experience, so it always pleases me when it’s done well. But to go back to the beginning, and what makes this good jazz in the first place, is the playing and the tunes. Blythe has never sounded better on any record of his that I’ve heard – or anyone else’s record either. The brilliant and underrated James Newton is given loads of fine moments here, while James ‘Blood’ Ulmer is unusually restrained, playing mostly backgrounds and fills, soloing only on the closing track. Bob Stewart’s tuba gives a unique character to the ensemble, and his couple of solos are also fine. Rhythm is taken care of by the amazing Jack DeJohnette, who’s all over his kit, Guillermo Franco’s percussion complements Jack’s wild rhythms, and the amazing Cecil McBee’s bass provides the solid grounding that the whole group needs to make it fly. Simply a great album however you slice it. —Patrick