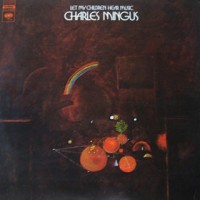 One of the more convincing attempts to fuse jazz with classical. Certainly an unusual album, even by Mingus’s standards (witness the sampling of an elephant in full-trumpet) but it seems to hold together in spite of the potential for catastrophe. There’s so much going on here that, however meticulously composed it may be, at times one can’t help thinking of the opening moments of Coltrane’s free-jazz masterpiece Ascension. Everyone of the instruments here is doing something worthy of attention at all times but there’s little one-upmanship. It is a collaborative effort if ever there was one. This is orchestral jazz in the most literal form. Musically there are times when it is considerably leaning more to the classical side of things than jazz, although classical in a cinematic sense. When you expect brooding horn swells, you’re never far from swinging brass bombast, and vice versa. If this is music for children, it’s for a darker kind of children’s story. The musical accompaniment to Mingus’s spoken-word story on The Chill of Death isn’t unlike an alternative film score for The Wizard of Oz, all dramatic flourishes and atmosphere in abundance, with moments of black humour throughout.

This is not a Mingus album for the jazz or Mingus neophyte, nor is it necessarily one for anyone who enjoyed Ah Um and Pithecanthropus and is looking for their next port of call. It isn’t typical of the works for which Mingus is most remembered. It is worth noting, however, that this is the album that Mingus himself was most happy with. If you trust the man’s judgement, you might find this being one of your favourites too. —Jaime