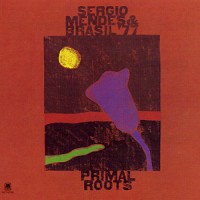 As the title suggests, this isn’t another excursion into Brazilian pop. Here, there’s no pandering to Tropicália, disco or whatever was en vogue in 1972 -yes despite being played by the Brasil ’77, the album was actually recorded in 1972 under the alternate title “Raízes.” This is an album of traditional Brazilian music. The compositions feature traditional percussion instruments such as the gogó, cuica, pandeiro and atabaques. Much of the compositions emphasize the African origins of Brazilian music. While “Primal Roots” doesn’t sell out to commercial pressures, it is far from a field recording of traditional music. While some songs feature minimalist chanting and drumming, others feature those silky smooth female vocalists, flutes and some psychedelic keyboard work. Sergio Mendes may never be remembered in the same light as Astrud Gilberto, Airto Moreira and Gilberto Gil but “Primal Roots” will always be remembered as his ‘important album.’ —The Delite Rancher