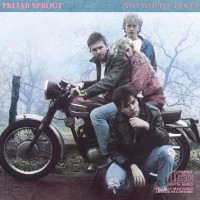 Some records just need a proper context. Older (and clearly wiser) friends tried to sell me on Prefab for years, but I would need to process The Style Council, ’80’s Roxy Music, and the Pet Shop Boys before being in a place where I could appreciate the genius of Two Wheels Good. It’s not that the music here specifically recalls any of the aforementioned groups so much as it gives a context for understanding certain production choices of the era, and the overall less modest aesthetic and ambition emblematic of the mid-’80’s. High-gloss or not, the best Prefab stuff stands-up to any of the premier UK indie acts of the day. Opening track “Faron Young” sounds like a snappier version of something the early Smiths would have attempted, and lead singer/mastermind Paddy McALoon’s lyrics have a self-absorbed sting and way with wordplay that outwit Morrissey. Although this record did contain the minor hit “When Love Breaks Down,” it may have been this same intelligence that ultimately thwarted their wider success. For a pop album, most of the songs are ambitiously complex in their construction, with eccentric arrangements and forward-thinking production flourishes (courtesy of Thomas Dolby) that consistently decline to make the safe choice. Of course, these touches are what make the album a classic, unique in it’s era, and any other. —Jonathan Treneff