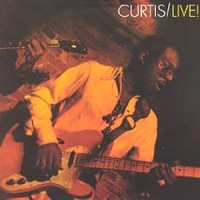 For better or worse, Curtis Mayfield is destined to forever be identified with Superfly. Never having been much of blaxploitation film buff, or funk disciple, I’d more or less shelved him under “important, but not for me”. Then one day – one misbegotten, hungover Sunday of yore, a friend unassumingly dropped the needle on Curtis/Live and blew what was left of my delicate mind. In the moment, the sounds emanating forth felt like a godsend – the only thing that could have possibly soothed my shattered and disheveled mind. This was music beamed down from the cosmos, painstakingly prepared by benevolent hands. This may sound like a lot of hyperbole, but I’ve kept myself honest, revisiting the record months and years after the point of impact, and the results remain the same: this record is a stone-cold masterpiece.

Curtis/Live gets across everything a live album should, but rarely does. For starters, Curtis had the savvy to assemble a batch of musicians who knew how to set up a vibe and dig their heels into it. The band is supernaturally in tune with each other, letting the songs expand and contract with an unhurried precision that intuitively follows Curtis’ restrained, yet highly emotional delivery. Many of his best known songs make appearances here; “I Plan to Stay A Believer,” “If There’s A Hell Below (We’re All Gonna Go), and “Superfly” all get makeovers, and are the better for it. Stripped of the flowery arrangements and porno-funkisms that could de-tooth his studio recordings, these songs are allowed to breathe and inhabit the loose-limbed bodies they deserve. The meditative readings almost border on the devotional, conjuring the same spirits as Sun Ra’s Arkestra at it’s peak, or the hazy and haunted spirituals of Rastafarian nyabinghi music. Thankfully, the recording quality matches the performances, with a room sound so stunningly balanced and alive you can almost hear a guitar pick drop onstage. The definitive Curtis effort, and a must-hear for anyone interested in music, or feeling, period. — Jonathan Treneff