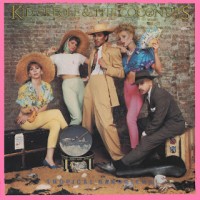 Coming out of the same NYC/Ze Records school that fostered the likes of Tom Tom Club, James Chance, and Was (Not Was), Kid Creole managed to stand out in a scene with no shortage of eccentrics, jokers, and flat-out freaks. One glance at the album covers confirms that no two words could have better summed up the entire ethos of this bizarre ensemble better than Tropical Gangsters, the UK title of the Coconuts third album. Kid Creole was an ex-English teacher who put his Masters degree into the service of a theatrical, but light-hearted take on the post-disco-funk explosion that was setting NYC clubs on fire in the early-’80’s. Creole’s former career bled through into the highly conceptual narratives that pre-occuppied his songs and albums, and Tropical Gangsters is no exception. The loose theme of the album revolves around the group being shipwrecked on an island of outcasts and their “gruesome ordeal”, as they are forced to play “RACE MUSIC” to broker their escape. Being of Latin descent, the Kid and his half-brother and bandmate never demurred from their background, often winkingly embracing it in the music and image of the band. Their sense of humor naturally extended into the songs themselves – “Annie, I’m Not Your Daddy” employs the female Coconuts in a dialogue wherein our hero must settle a question of paternity the only way a tropical gangster knows how – with brutal frankness – “See if I was in your blood/Then you wouldn’t be so ugly”. Tropical Gangsters takes the coconut and runs with it from here, with seven more hilarious tales of island-life scandal and intrigue that duly threaten to grind the dance floor to dust while they’re at it. KC had made good albums before this, but this was where the songs and the groove finally came together to create the perfect tropical storm. —Jonathan