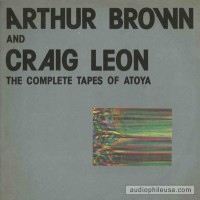 A high-level head-scratcher in the best of ways, The Complete Tapes of Atoya is one of those records that defies reason by it’s very existence.  As confounding a pair-up as it reads on paper, it’s still somewhat hard to believe that a record featuring these two forces (yes, Crazy World Of Arthur Brown Arthur Brown) would go un-noted to the extent it has.  Although Craig Leon may not signify as a household name, he was a significant figure in the development of the NYC punk and new wave scene of the mid-late ’70’s and beyond, working A&R and producing for Sire Records – bringing the Ramones, Blondie, Richard Hell, and Suicide to the label and working on all of the aforementioned classic debuts.

Recorded in ’81 Atoya sat unreleased for three years – not that it made a difference.  It’s doubtful the world was more prepared for this in 1984 than it was three years earlier.  Working a musical program of what would now be termed “minimal synth,” Leon’s stark synth and drum machine backdrops resemble the early output of Cabaret Voltaire or Depeche Mode, even flying close to Human League levels of anthemic pop with the jubilant “Strange Romance”.  On top of it all perches the inimitable Arthur Brown, eccentric and wound up as ever, holding forth with formidable accent on the big issues: dinosaurs, big guns, and the King of England.  Perhaps best of all, and worth the price of admission alone, is what could be the definitive swipe at the Diddley/Holly chestnut “Not Fade Away”.  Many have thrown their ring in the hat with this standard, but no one has ever quite done it this way.  Sounding more than a bit like Suicide, the skeletal, mechanical funk boils all of the swagger out of the song, save for Brown’s straining, leg-caught-in-beartrap howl, rivaling Devo’s wry covers of “Satisfaction” or “Working In A Coalmine” in terms of visionary, bizarre re-animation.  A record who’s time it feels, may have finally come. —Jonathan Treneff